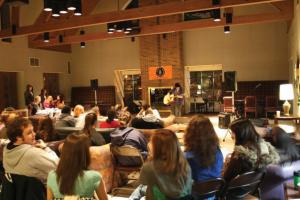 Contributed photo: Junior Meghan McNamara played guitar and sang for a crowd of students at AmnesTEA on Thursday, Jan. 14.

Juvenile life without parole means criminals who committed crimes under the age of 18 will spend their entire lives in prison.

“The issue is very controversial, and I am glad that it is being brought into the light,” freshman Kaitlin Muldowney said.

On Thursday, Jan. 14, Amnesty International sold fair trade coffee, cookies and tea and had an open mic night where some students shared their talent for the cause.

Students read poems, played guitar and violin and sang. They played songs from different genres and bands including Third Eye Blind, U2 and Bob Dylan. Some students performed original works.

“I felt it was important to play the event because I learned how to play guitar my senior year of high school and never really played in front of anyone, so I thought this was a good opportunity and atmosphere to first perform. Plus, I am in the club so I had to represent,” McNamara said.

Freshman Nikki Sherrets said listening to the performers was “a great way to unwind after a long day.”

Rachel Brown, one of the presidents of Amnesty, said, “Amnesty brings up issues of human rights and we take into account what people are passionate about, like juvenile life without parole which is something the club felt strongly about because juveniles who made mistakes long ago are still serving time for it.

“Also, fair trade is important because the people who grow things like tea and coffee need fair pay and benefits for the hard work they do,” Brown said.