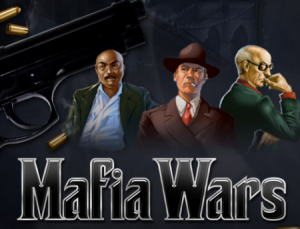 Cons: Not very in-depth play, nothing new or special

This week’s game is another Facebook application of which I am sure many of you are aware. Mafia Wars is one of the biggest games on Facebook and, personally, I can’t go around campus without seeing at least one person on Facebook playing it.

Mafia Wars is a game where you play a mob boss and do missions to level up and improve your skills. The missions you can do per session are determined by the energy you have, which you can improve when you level up.

You invite friends to play the game so that you are able to make your mafia group larger and able to take down bigger mafia groups that other Facebook users and their friends have. The goals of this game are to make money, level up and prove you are the best in your mafia group (as a small goal) or in the game (the larger goal).

The graphics are very nice, but graphics are not exactly what this game is going for, because it is not a game that has a lot of interaction in it. However, the art in this game is very nice and looks professionally done and is very pleasing to the eye.

Mafia War’s biggest downfall is that it is plain, straight-out boring at times. All you really do is click a button several times until you run out of energy. Then you are done with the game for a few hours until you come back and do it again.

Sure, this game is a good time waster and it is easy to get a lot of friends to play because it is so popular right now. However, there are many other games just like this one. The game play does not really draw you in. The main emotion I get when I play this game is that it is something to do while I wait for my next class to start.

Overall, Mafia Wars does have some good things to it and it does what most Facebook applications are meant to do – take up time in your day to avoid boredom.

If you want to contact me, find people with the same interests or talk about this game, go to Mercyhurst Game Geeks on Facebook.com.