Answers on a Mercyhurst Student Government (MSG) survey showed that students want a locker room in the Rec Center.

The Board of Trustees responded by approving the plan to build locker rooms with showers in the Rec at their meeting on Thursday, Jan. 22.

The students who answered ‘yes’ were then asked what improvements were needed. 329 of them said a locker room was needed, Sanchez said. 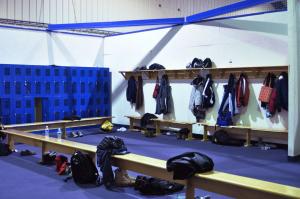 Tyler Stauffer photo: The locker rooms will be located where the current changing area is now.

Vice President for Student Life Gerry Tobin explained the inconvenience of not having showers in the Rec.

After working out, students are able to go back to their apartments and shower, but “commuters don’t have an apartment to go back to,” Tobin said.

Even so, commuters are not the only ones inconvenienced by the lack of showers.

Many students work out between classes and don’t have the opportunity to shower, and many employees would work out if they had a place where they could change and shower, Tobin said.

The locker rooms will go where the changing space and two offices are now. This area is about 1,300 square feet.

“Since the Rec was built, men and women have had to share the changing space,” Tobin said.

According to Tobin, the need for locker rooms has been increasing.
Last summer, the changing space became smaller due to two offices being built.

“When the changing space we had was lessened, it really just magnified the need that was present,” Tobin said.

Tobin and Sanchez discussed the benefits of adding locker rooms.
“Students will now have the option to change, work out and shower, or they can do what they have been doing,” Tobin said. “Regardless of whatever behavior students choose, it will be much better for students to have their own privacy to change.”

As an ambassador, Sanchez said this project will help attract students to Mercyhurst.

When prospective students see the changing room in the Rec, “I can see the letdown in their faces,” Sanchez said.

“This is a project that really came out of student interest and student desire,” Tobin said. “It will be a really, really nice facility.”

“I like the idea,” freshman Beth Henry said. “It would be nice because then you could just shower and go to class or go to dinner.”

The cost of the locker rooms is about $215,400. The college will fund this project through the capital projects fund for the 2010-11 year.

The construction is expected to start during the summer and be completed by the time students arrive at Mercyhurst for fall term.