Today, Mercyhurst College hosts cross-town rival Gannon University in both men’s and women’s basketball. The women kick off the action at 5:30 p.m., to be followed by the men at 7:30 p.m.

The Knights have dominated the Lakers in basketball throughout recent memory. The women’s basketball team has not defeated the Knights since 2003, and the men haven’t beaten Gannon since 2007. Things are likely to change, however, for at least one of these teams. 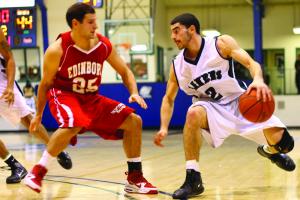 Mercyhurst College junior Heiden Ratner looks to lead the men’s basketball team over Gannon University for the first time sinceGannon’s women’s basketball team is a dynamo this year at 22-0 and ranked No. 3 in the nation. They have outscored their opponents by an embarrassing 23-point margin per game.

They are led by senior guard Kristina Freeman, who is averaging nearly 15 points per game and leads her team in assists, steals and blocks. The Knights are a fine-tuned, veteran, high-octane basketball machine.

Mercyhurst’s women’s basketball team is currently 12-6. It is a rather inexperienced club that has experienced its fair share of growing pains. The Lakers are lead by junior Amy Achesinski, who is averaging 14 points per game along with eight rebounds per game.

tch-up on paper is not a very attractive one for the Lakers. They are clearly outsized, have a definite lack of experience and are frankly outclassed by their opponent.

If they are to have any shot at pulling off one of the biggest upsets in Mercyhurst sports history, which a victory in this sort of mismatch would surely be, the Lakers must slow down the pace of play and hope for early foul trouble from Freeman.

They will need to jump out to a quick lead and feed off the energy brought forth by the home crowd. Achesinski will really have to dominate against a large front line put out by Gannon.

This will be the Lakers only chance against the Knights. Victory, is very unlikely. More likely, this game will get ugly and get ugly fast as the Lakers don’t have the size or superior 3-point shooting to make up for a lack of experience and skill in comparison to the Knights.

The Knights’ men’s basketball team is currently 9-9 and has a very inexperienced roster. The Knights are lead by George Johnson, who is scoring 17 points per game. They have been outscored by their opponents by an average of five points per game this season. The Knights only boast three seniors.