Women's basketball in a slump

After their longest winning streak since 1999, the Mercyhurst College women’s basketball team seems to be hitting some rough patches in the Pennsylvania State Athletic Conference. The Lakers currently stand 4-4 in the PSAC West and are facing a lot of tough teams. 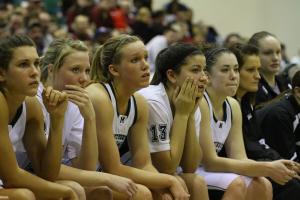 The Mercyhurst College women’s basketball team looks on as they lose another game against Gannon.
Last Wednesday, the team took on the Gannon University Knights. After taking the lead at halftime, 33-30, the Lakers were feeling strong but knew the second half would be a challenge.

Unfortunately, the women were unable to hold the lead at the end of the second half. The Knights outscored the Lakers, who fell, 66-52. Despite a heartfelt loss, the women have kept their heads high and say they know not to let one loss get them down.

Keeping this in mind, the women went into Saturday’s game against Slippery Rock University with aims to do their best. Junior Samantha Loadman scored a career high of 15 points and junior Amy Achesinski added 17. The game was intense, back and forth, and fast play was the theme of the game.

With six seconds remaining, the Lakers were up by one. The fans were on the edges of their seats. Moving quickly, with 2.8 seconds left in the game, The Rock had the ball and hit a jump shot that just fell through the net. The Lakers lost another close and emotional game, 54-53.

The team repeatedly said they knew PSAC was not going to be easy, The team is working harder than ever and plan on showing their opponents “what they’re made of.”

The Lakers face off against Erie rival Edinboro University today, looking to raise their PSAC record.