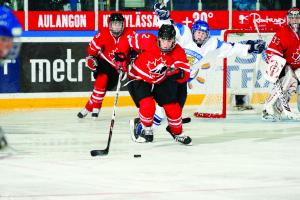 Agosta participated in the 2006 Olympic Winter Games in Torino, Italy, and contributed to Canada’s gold medal performance with a hat trick on her 19th birthday against Russia. She was Canada’s youngest player on that team.

Agosta and Canada are looking to have a repeat performance of the Torino Olympics and take home a gold medal at this years games on their home turf in Vancouver, B.C.

“Our goal is to come out on top, and the coaching staff really has a good plan in place for us to be able to accomplish that,” Agosta said.

This time, however, Agosta looks to serve an even bigger role, as she has flourished into an offensive weapon since the last Olympic Games.

“This time around my role is a lot different and a lot bigger. I am looking for the back of the net a lot more than I was in Torino,” Agosta said.

Agosta credits much of her development as a player to her time at Mercyhurst.

“Mercyhurst was a great choice for me, and Coach (Michael) Sisti and the rest of the coaching staff have really helped me improve as a hockey player and really taken me to that next level as a player,” Agosta said.

Agosta was a dynamo for the Lakers in her time at Mercyhurst.
In her first three seasons with the Lakers, she scored 119 goals and 217 points. Agosta scored both game-winning goals in the Lakers Frozen Four run, as the Lakers finished as national champion runner-ups.

“Meghan has been a big part of our success in her time she has been here and has really enhanced our notoriety as a program,” Sisti said.

Mercyhurst remains on Agosta’s mind as she prepares for the Olympic Winter Games in Vancouver which start on Feb. 12.

“I try to keep in close contact with the coaching staff, and they keep me updated on how they are playing although I have not been able to watch a game of theirs this season,” Agosta said.

Agosta is very impressed with the way the Lakers have been playing this season, as they have been the top-ranked team in the nation for most of the year.

“I am very proud of them, and they have done great, and it is very impressive to see a team so young play the way they have been playing,” Agosta said.

Agosta is also excited at the opportunity to finish up her college career at Mercyhurst next year.