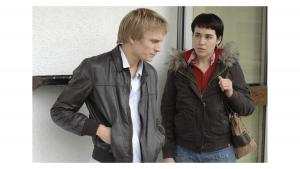 pac.mercyhurst.edu
Compromising is an unavoidable facet of the 21st century; we rarely encounter a situation where we can gain one thing without giving up something else in return. But imagine having your life, or the life of someone you love, put in these terms.

The spring term Guelcher Film Series kicks off with a gripping drama derived from this very circumstance.

In “Lorna’s Silence,” the title character, an Albanian refugee living in Belgium, finds herself caught between safeguarding the life of her husband and the monetary powers of a shady underground.

Lorna, played by Arta Dobroshi, is initially seen as an inconsequential dry cleaner whose boyfriend, Sokol, played by Alban Ukaj, is a traveling salesman who comes to see her when his travels permit.

Her legal residency in Belgium has been secured through her sham marriage to a drug addict named Claudy (Jérémie Renier), whom she has come to love.

Despite her highly questionable situation, Lorna has no choice but to keep the status quo, as the underground has the ability to financially ruin her. But her unstable life finally comes crashing down when the underground decides it has no further use for Claudy. They want Lorna to trick him into a drug overdose; instead, they wish her to ‘marry’ a Russian crime boss who needs papers. In the meantime, however, Claudy desperately wants to clean up his life and begs Lorna to help him.

Lorna now finds herself faced by a crushing ethical and mental dilemma. On the one hand is the underground, trying to force her hand with their monetary control and holding a man’s life over her head. On the other hand, Lorna might save a man’s life, but would then face either a future of destitution or death by the underground.

Presented in French with English subtitles, it shows in the Mary D’Angelo Performing Arts Center today at 2:15 and 7:15 p.m. Tickets are free for Mercyhurst students with ID.