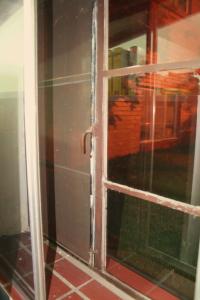 Ethan Magoc photo: Windows that blow open or do not latch are being replaced in the Highland Square Apartments. Mercyhurst College administrators are deciding if they should demolish the apartment buildings at the top of Briggs and Lewis Avenue.

Residents of these buildings have experienced mold, insect infestations and windows that blow wide open or are difficult to close or latch.

“We recognize that Highland Square has a significant need for renovation,” Vice President of Student Life Dr. Gerry Tobin said.

The college conducted a study of the Highland Square Apartments to see if it is “worth our investment to make repairs to those buildings or ought we to look at demolition of the buildings,” Tobin said.

Tobin and Assistant Vice President of Student Life Laura Zirkle received the results of the study on Friday, March 5. Before the results can be made public, the Mercyhurst Board of Trustees and Mercyhurst President Dr. Thomas Gamble must review them.

To fix the windows problem, Mercyhurst is in the process of replacing some of the worst windows in the four apartment buildings on Briggs and Lewis, which are known as Highland Square Apartments.

Whether the decision is made to repair the four buildings or to demolish them, “We recognize that the windows have to be replaced now,” Zirkle said.

The windows are able to be removed and reused in another building if the Highland Square Apartments are eventually demolished.

If the option to demolish the apartments is chosen, a new sophomore housing area would be built.

The proposal for a better sophomore living area came from a six-month study of campus housing a few years ago conducted by the Westminster Group. This study included several student focus groups and surveys as well as looking at all of the buildings on campus.

The conclusion of the study showed the need for a two-phase housing project. The first phase was to significantly improve freshman housing. The second phase was to “create a more creative and developmental sophomore area,” Tobin said.

According to Tobin, the sophomore area that would be built would have suites that four to six students would live in with two to three students in one bedroom.

These suites would have meeting areas in the building and would help sophomores transition from a freshman dorm to an upperclassman apartment, Zirkle said.

If the college decides to build a new sophomore living area, the current Highland Square Apartments would be the location of the new buildings due to their prime location, and because they are the worst kept buildings, Zirkle said.

The type of sophomore housing to be built would be determined by what the college and students are able to afford.

“We want to provide the best experience for students and maintain a cost that is reasonable,” Tobin said.