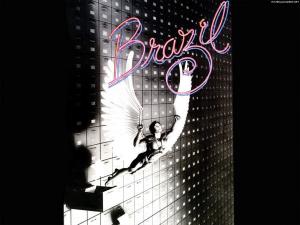 pac.mercyhurst.edu photo“Erie is Cold,” the T-shirt proclaims. And in March, it is not only cold, but rainy and windy, with some wet snow thrown in for good measure. Lovin’ Spoonful’s “What a Day for a Daydream” comes to mind, because really, who among us hasn’t dreamt about Florida or the Bahamas or Mexico in the last six months while traipsing through the slush?

“Brazil,” this week’s installment of the Guelcher Film Series, revolves around this daydream motif, using it to create and draw out conflict and drama throughout the film. In time-honored tradition, protagonist Sam Lowry (Jonathan Pryce) daydreams about rescuing a beautiful maiden, while otherwise occupied in a low-level government position in fictional Britain.

As is often the case in a science fiction film, Sam’s fly-below-the-radar life is about to take a life-altering turn. It starts off innocently enough, when Sam is asked to resolve a typing error, which previously had caused the incarceration and accidental death during the interrogation of Archibald Buttle instead of the suspected terrorist, Archibald “Harry” Tuttle.

When visiting Buttle’s widow, Sam is inadvertently introduced to the woman’s upstairs neighbor Jill Layton (Kim Greist), who bears an uncanny resemblance to the woman in Sam’s daydreams. Jill has been helping Buttle’s widow in investigating the death of her husband. In doing so, she has become disillusioned with bureaucracy, while unknowingly getting herself labeled as a terrorist for her efforts.

Through his encounter with Jill, Sam also becomes acquainted with the infamous Archibald “Harry” Tuttle (Robert De Niro), an air-conditioning specialist and former government worker who left to escape the amount of paperwork.

Even in the face of these occurrences, Sam is determined to learn more about Jill, and so asks his mother Ida (Katherine Helmond), a woman vainly addicted to rejuvenating plastic surgery with connections to high-ranking officers, to help him get a promotion to “Information Retrieval,” where he will have access to Jill’s protected files.

Upon obtaining access, Sam is able to track his lady down before she is arrested, and fixes her records so that she appears deceased, thus snatching her from under the bureaucracy’s thumb.
The two share a night together before Sam is arrested for ‘misuse of his position.’ The government considers him an agent in a terrorist plot, along with Jill and Tuttle, and restrains him in a large, empty cylindrical room, to be tortured by his old friend, Jack Lint (Michael Palin). It is in this hopeless situation that Sam’s daydreams once again come to life.