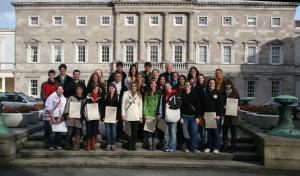 Students stop for a picture in front of the Irish House of National Parliament.

This past Friday, March 26, we left on a bus that took us through the beautiful Irish countryside. We eventually arrived in Dublin, where we were to stay for the weekend.

Dublin is very different from the traditional, smaller Irish cities we have visited. It was very much like a larger U.S. city with a much faster pace of life.

Dublin is full of coffee houses, shops, street performers, a variety of pubs and historical sites.

Some historical sites we visited were Dublin Castle, which was the center of British rule in Ireland until 1921 (when by treaty sovereignty was transferred to the 26 Irish counties as the Irish Republic.)

We also spent time checking out the Book of Kells exhibition at Trinity College. Many of us also stopped at the Guinness brewery for a tour, where we were able to pour our own pint.

Once we were done touring for the day, we broke up into smaller groups to eat dinner and then explore Dublin’s nightlife. As a group, we would like to thank Tom Keith and Fearghal for showing us Dublin.

Dungarvan’s Mayor Damien Geoghegan, along with his wife Natanya, continue to be unbelievable hosts. During the week, Natanya took a group of us to Mahon Falls. These are beautiful waterfalls flowing from a mountain lake into a valley.

We spent a few hours rock climbing around the falls and also enjoyed the peaceful sound of falling water against the rocks. The water is pure enough that we leaned over the bank of the stream and drank it. The beauty of the falls, along with the grazing sheep, was astounding.

Natanya also took us to Cobh, the last port the Titanic stopped at before departure, and then to the cathedral of St. Colman. We then took a car ferry across the river and headed to Cork University and met a few students.

We all had a busy week and weekend and are now trying to rest up to meet Dr. Hosey and Dr. McGurk in Paris this Easter Sunday. 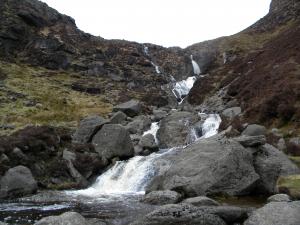