'Dis-Ease' presents dancing with a message 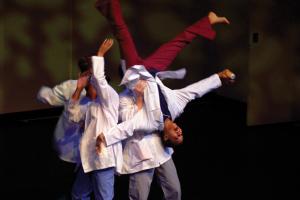 The performance, titled “Dis-ease: A Coming Out,” was free to the public and received a phenomenal response from the community. Each seat in the theater was filled and people were spilling down the stairs and standing along the back wall.

The show featured all original music by Sturtevant and new choreographic works from Mark and Solveig Santillano, founders and directors of SoMar Dance Works, a local nine-member dance company.

The songs circled around Sturtevant’s struggle with bipolar disorder and all the other challenges that arose in his life as a result.

This sold-out concert was more than simply a dance performance. Sponsored by Stairways Behavioral Health, “Dis-ease” also served to raise awareness about mental illness, including bipolar disorder. It lent a three-dimensional element to Sturtevant’s heartfelt story.

“The connections between the dancing and lyrics worked really well,” junior Christine Wilbur said. The performance rolled along as Sturtevant and his band played tunes in a wide variety of styles, sporting banjos and washboards at times, and plucking out a bona fide tango at others.

The performance proved to be wonderfully fresh and imaginative, blending SoMar’s inventive movement and interpretations with Sturtevant’s gentle voice.

“She Got Away” featured the Santillanos doing a dance of separation.

Between dance numbers, Sturtevant chatted with the many people who had gathered, filling in the gaps of the story and explaining in more detail all that he has faced. Sturtevant’s complete honesty and simple frankness in both the lyrics of the song and his chats made the concert especially poignant and refreshing for those who have faced the difficulties of mental illness themselves.

Even more amazing than the positive response from the community was the fully-rounded nature of the event. Once all the singing and dancing had been completed, with overwhelming support from the audience, all were welcomed to stay for a discussion about the difficulties of dealing with mental illness, as well as to ask questions. The discussion was led by Mary Ellen Dahlkemper of Stairways and included a panel made up of psychologists and therapists from all over Erie, as well as Sturtevant and both Santillanos.

There is no doubt that Sturtevant and SoMar Dance Works accomplished a great feat on Sunday. “The performance dealt with the topic really well. It was very moving,” sophomore Victoria Scott said.

Junior Nicole Lyons, who performed in the concert, said, “Performing in ‘Dis-ease’ was very different from other performances because it carried such a strong message. It was great to have that kind of experience — it really tested my maturity as a dancer.”

For both performers and viewers alike, “Disease: A Coming Out” was a powerful experience.