Marsh being filmed in her apartment.

Many students returning from Easter Break are returning to college after visiting their families.Mercyhurst sophomore JoEllen Marsh filmed a documentary instead.

The Merciad’s own editor-and-chief has a slightly different home life than many are used to. Instead of one mother, she has two: Lucinda Marsh and Deneen Matthews.

Jeffrey Harrison, otherwise known as Donor 150, was a prolific donor during the 1980s, and as a dog-walker, masseuse and model, was in relatively high demand. Artificial insemination was in its infancy at this point, but it was considered safe. Now JoEllen, through the help of The Donor Siblings Registry, has had a chance to meet not only her half-siblings, but her biological father as well.

Marsh has been exchanging letters with one of her half-siblings from Long Island, New York, for several years now, and three years ago met for the first time.

Now, a documentary is being made on the reunion between Donor 150 and several of his biological children.

The documentary, directed by Jerry Rothwell, is at the moment titled “Donor 150,” and is airing in Great Britain, but there is a possibility that it will also air on HBO or PBS. Marsh heard about the documentary about a year and a half ago when the director needed to do some preliminary filming for sponsors.

The majority of the filming was done over this past spring break, when the director, producer and a sound technician came over to film JoEllen on campus and with her family. “They were all English, so it was cool to compare cultures and talk with them,” Marsh said.

Over four days, the film crew followed her in the Intel lab, her apartment and the Merciad newsroom. They filmed her bowling with friends, cooking at her boyfriend’s house and singing with her grandparents.

“It was a really interesting feeling to be on camera for so long,” Marsh said, “and to just open up in front of practically complete strangers, and talk about really personal things.”

Marsh already participated in a half-hour documentary for a French student film maker.

“I didn’t like the direction he took, but I think this documentary will focus on the positive conections of our story,“ Marsh said. 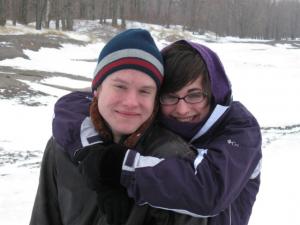 Marsh and her boyfriend, Luke Nowak, were filmed at Lake Erie.