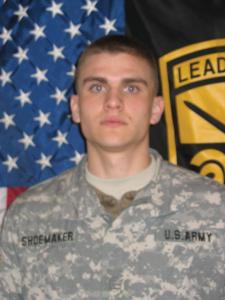 Cadet Kirk Shoemaker earned the opportunity to attend the George C. Marshall ROTC Award Seminar from April 13-16 at the Virginia Military Institute by being selected as the top senior Cadet in the “Pride of Pennsylvania Battalion.”

The “Pride of Pennsylvania Battalion” is a partnership between Mercyhurst College, Gannon University and Penn State Erie.

Shoemaker joined the ranks of other top cadets from across the nation to participate in the seminar, which focused on National Security.

Chief of Staff of the U.S. Army George W. Casey Jr. and other high-ranking Army officers attended the seminar as keynote speakers.

“I am very excited and honored to be able to represent the ‘Pride of Pennsylvania Battalion’ and Mercyhurst College,” Shoemaker said.

He will be branching as an infantry officer upon his commissioning in May.

Shoemaker, a senior Intelligence Studies major at Mercyhurst, is the Cadet Battalion Commander. This is the highest obtainable rank as a cadet.

He is involved with both the Mercyhurst Honors and Ambassador programs.

The Marshall ROTC Seminar, in its 33rd year of existence, is named in honor of George C. Marshall, who served as Army Chief of Staff during World War II and served as secretary of state.

Marshall served as Secretary of State and later as Secretary of Defense during President Truman’s administration. His efforts to help the economies of Europe recover from World War II earned him the Nobel Peace Prize in 1953.

The Marshall Award is given annually to the top Cadet from each of the 273 Army ROTC units around the nation.

The event comprises the largest annual gathering of those about to be commissioned through the Army ROTC program.

Within weeks of participating in this seminar, most of these young men and women will begin their duties as junior officers in the U.S. Army.