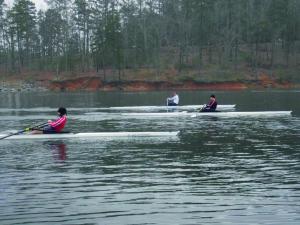 Freshman Ivan Palikuca (left) and Junior captain Jovan Jovanovic (right) are key to the success of the Mercyhurst College rowingMercyhurst’s men’s rowing team is doing well this season with the help of three outstanding athletes from Serbia.

Stroking the boat is freshman sensation Ivan Palikuca, and right behind him in the number four seat is captain Jovan Jovanovic.
Additionally, senior Stanislav Kostic who is a senior this year and has been recovering from a foot injury.

The impact of the Serbians is impressive.

“Jovan is a really well-rounded individual. He is one of our strongest rowers and will be our captain next year,” head coach Adrain Spracklen said.

“Ivan is the lead stroker in our men’s boat and has broken all our rowing records as a freshman,” Spracklen said.

Jovan and Stanislov have also been key members on the Lakers’ most successful boats in the Henley Royal Regatta, Dad Veil Regatta and the IRA National Championships.

Jovan and Ivan are from the capital city of Belgrade, while Stan is from Smederevo.

Growing up, they participated in many sports, including basketball and soccer. Ivan said he even took Taekwondo classes.

They did not develop a passion for rowing until the sixth grade.
But when they did pick it up, they took off.

The Serbians’ trip to Mercyhurst would be one that was challenging for both the athletes and Mercyhurst.

Serbia has no college placement tests so they had to take the SAT to qualify to attend a school in the United States.

The foreign players also have to take a test to determine their command of the English language.

Speaking little English, they found the test difficult, but they achieved high enough scores to be accepted by Mercyhurst.

They also considered a few Ivy League colleges.
Jovan’s interest in Mercyhurst was sparked by the possibility of rowing for Spracklen.

“I found Mercyhurst online and when I learned that the head coach (Adrian Spracklen) was the son of Mike Spracklen, I immediately liked Mercyhurst,” Jovanovic said.

Mike Spracklen is a successful rowing coach and has earned three Olympic medals.

Jovan was essential in the recruitment of Ivan last year.

“I remember Jovan would be talking to Ivan in Serbian on the phone all the time about Mercyhurst before Ivan came here,” Spracklen said.

“It was a little harder for Ivan to get to Mercyhurst because of the language barrier for one, but also because there was some issue with his national team in terms of eligibility for the NCAA,” Spracklen said.

Jovan and Ivan have been happy with their decision in terms of academics, too.

“As far as the college is concerned, I like the teacher-to-student ratio. I like the small school setting,” Jovanovic said.
However, both Ivan and Jovan miss their fast-paced lives in Belgrade.

“Yes, I like the college, but Erie is a dead place. We come from a fast-pace city, and there is just more to do there,” Ivan said.
Overall, Spracklen has been very impressed with the Serbians’ adjustment due to the support system they have built.

“It’s a big culture shock for the guys when they first get here, but it has been quite different for them than others since they had each other to kind of guide their way through it,” Spracklen said.