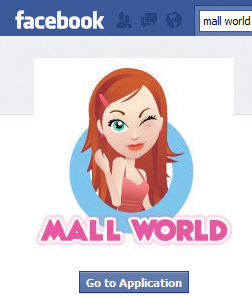 Mall World has great graphics and is mostly geared towards women who are into fashion.

Cons: This is a game for girls

Rating: Four out of five stars

The game I bring to you today is a game where I had to risk my manhood. The game called “Mall World,” found on Facebook, has got to be one of the girliest games I have ever played. In this game, you are the owner of a fashion shop.

You sell purses, shoes, dresses and everything else in between. Basically, you buy articles of clothing to sell them so that you can buy clothing for yourself and accessories for the store along with buying more merchandise to sell.

Mall World actually has to be one of the best looking games on Facebook. The graphics are superb. Many of the games I have seen on Facebook are very grainy and my eyes sort of have to strain to see what’s going on.

Mall World, however, is very easy on the eyes. Also – and as a man this is hard to say – it is actually very fun. It seems to have a very good design going on and appeals very well to its audience.

Its good design almost seems to override the fact that this game is made for girls.

This game is definitely a girl’s only game. There is only one avatar you can make and that is female so if you are a man who has any wish to join this game it would be very hard because of its very gender specific leaning.

That being said, I don’t think that a whole lot of men would play this game anyway. The game is too specific about who it is trying to appeal to.

Overall, this game is fun, despite that is really only for girls.

The graphics are some of the best I have seen on Facebook, and the game play is great. However, as a guy you are almost embarrassed to play this game because of how darn girly. This game would improve a lot if it was more gender neutral. Unfortunately it is not, but it is very good appealing to the audience it does want.

If you want to talk about this game and others, visit Mercyhurst Game Geeks on Facebook, and if you want to read more of these reviews including watching my weekly video Blog, check out my site charleswheaton.blogspot.com.