Vidovic shows there is more to art than technique 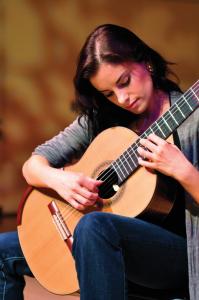 Tyler Stauffer photoArtists spend years perfecting technique. It is considered to be the most fundamental component of any great artist.

Though much stress may be placed on finding the perfect technique, there is also another element to being a great artist which is often overlooked or underestimated, and this is performance quality.

It was such an element of performance that was proved to be lacking in Ana Vidovic’s performance in the Walker Recital Hall this past Friday, April 23.

The young guitarist was indeed beautiful and profoundly talented and performed intricately complex pieces, producing quite unique sounds from an instrument we all seem to know so well.

The perfect acoustics of Walker Recital Hall carried Vidovic’s music flawlessly around the room, free from any distortions from microphones or electronics.

The pieces chosen were quite beautiful and were performed for a gracious audience.

“It was an impressive performance,” junior Tara Heade said following the show. “You could see the concentration on her face while playing and it never broke until she lifted her hands from the guitar.”

Each piece of music was intricate and involved tricky finger work and impeccable precision. One particularly striking piece was “Asturias” composed by Isaac Albeniz.

It was, however, in the presentation of this flawless music that audience members were left wanting.

The stage was completely empty except Vidovic seated in a beautiful ball gown downstage.

With such minimal production elements, the performance was granted a certain simplistic charm, but such a charm only lasts so long.
Without any scenery, changing lights, or other artists onstage to continually attract the audience’s attention, the bareness of the stage made it very easy for audience members to begin thinking of to-do lists rather than the outstanding music to which they were listening.

More irksome than a sparse stage was the lack of connection with the audience. The artist spoke to the audience very seldom, projected energy towards them even less and left little transition between pieces of music, making the concert feel segmented and choppy rather than a cohesive event.

Many times during a performance or show, audience members have very little knowledge of the subject and need the artist to help them understand and get as much out of the performance as possible. Though a wondrous technician and a beautiful instrumentalist, through an underdeveloped sense of performance, Ana Vidovic left her audience struggling to understand her message.