Your Weekly Report from Dungarvan, Ireland: Exploring the Atlantic coast 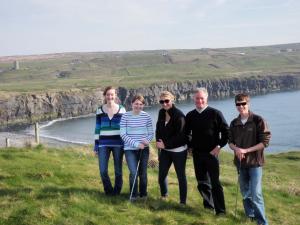 A group of students, along with Dr. Snyder, golfed a par-three course on the coast of Ireland.

This week after classes were over, we took a trip to the West, to county Clare. Western Ireland is the picture-perfect Ireland everyone imagines when they think of Ireland. It is where the majority of the Irish vacation during the summer.

On the way west, we stopped at the Rock of Cashel, a castle later transformed into a church which has roots dating to the 5th century CE. After the Rock of Cashel, we arrived at the hostel where we stayed in Lisdoonvarna. (Christy Moore, the artist we saw in concert, sings a song called “Lisdoonvarna” that is worth checking out).

After we got situated in the hostel, we had the rest of the evening to ourselves. Many students explored the small town. Others, including myself and Dr. Snyder, went to play golf on the coast of the Atlantic Ocean. As we played the par-three course, we heard cows mooing. When we weren’t looking for our golf balls in the thick Irish rough, we hit balls into the ocean.

Early Saturday morning, we left to catch a ferry to take us to the largest of the Aron Islands, Inis Mor. The island is nine miles in length and only inhabited by 800 people. Once we arrived there, we either hired a bus driver or rented bikes to get us around.

My group went to what is called “the worm hole,” which is a naturally shaped rectangular shaped hole on the cliffs’ edge that fills up with water when the tide rises. To get there we had to cross a mile of limestone on the coast. It looked like another planet. As we walked, the waves splashed up against the cliffs; it was surreal.

Then we went to the Ring Fort, Dun Aengus, a prehistoric fort built on the peak of the cliff overlooking the ocean. The fort is on a cliff 300 feet high. We crawled out to the ledge and were breathless when we looked down. When we got back to the hostel later at night, a fair amount of us went out to a local pub to enjoy some traditional Irish music.

Sunday we took a bus around County Clare to key sites. We first stopped at the Burren, which is the Irish word for rock place. It is a stretch of land covered by nothing except exposed limestone. It extends right up to the Atlantic (there were a number of rock climbers here). We then stopped for some tea and coffee.

After that, we stopped at some extremely old churches and cemeteries. We then went to Poulnabrone dolmen, which is an ancient tomb built of limestone; it is 5,000 years old. Finally we stopped at the cliffs of Moher. They are cliffs up to 600 feet high overlooking the Atlantic Ocean. When we were there, it was pretty foggy, but when the fog lightened up the magnitude of the cliffs became clear. 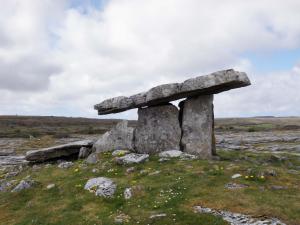 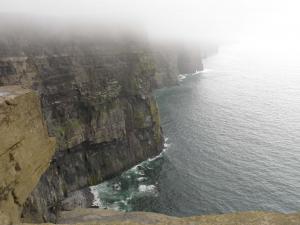