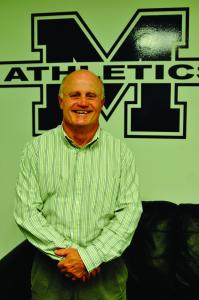 Mercyhurst College’s Athletic Director Joe Kimball is nearing the end of his first year at the athletic director position.Being an athletic director at any level can be a stressful and extremely time-consuming job. A person also has to be organized, with different sports going on at the same time.

He or she, therefore, needs to have a very supportive staff of administrators and coaches to help them.

Luckily, this is true at Mercyhurst.

“We have a great staff, we have an environment where people want to work and we work with an open-door policy. I have had input from coaches, suggestions that they want and need for their sport, the way they have approached me has all been positive,” said Joe Kimball, who took over as athletic director in July 2009.

Kimball says he feels good that the coaches want to communicate with him, and that they have provided good ideas on facilities and improvements.

With the help of his staff, Kimball has made it through an enjoyable first year as athletic director.

“It’s been hectic and very chaotic, but I love it. It’s all about athletics, and I feel very blessed that I love what I’m doing and wake up looking forward to going to work,” Kimball said.

The hours can sometimes be long with games late at night, but Kimball says he doesn’t consider watching games to be work because of how much he enjoys it.

One can often see Kimball at games, as he tries to attend as many as possible. He says he has built a rapport with athletes in most sports. He cites the great atmosphere around the sports teams as a way to keep young.

Kimball is especially proud of the fact that there are a total of 568 athletes at Mercyhurst with a average GPA of 3.1. He believes this a great compliment to the coaches, as there are quality student-athletes at the college.

Kimball was a two-sport athlete in football and wrestling. He has been able to get to where he has today because of the education he received, and he recognizes the demands of being a student-athlete.

There are, though, frustrations of the job.

“I wish we could get things in place right away, but we have to consider money, time and planning. I don’t like sitting still, which keeps me going. We have to have the best interest for all programs,” Kimball said.

“There are frustrating times, as you can’t please everybody, but that’s life. People leave my office disappointed, but they understand because they know we’re fighting for them.”

There are no major plans in place right now for the athletics department, Kimball said. They are, however, working on some small things to improve facilities for games and practices.

Kimball does have long-term plans, saying, “I want to see improvements in three to five years, and to continue to recruit quality student-athletes.”

“I love what I’m doing, and I respect the people I’m working with. The administration are listening to us and our ideas, and I hope this continues,” Kimball said with a smile, evident that he is enjoying every moment as athletic director.