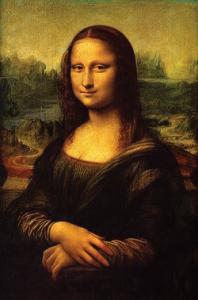 Wikipedia.org photoArt aficionado or no, most people know what, or rather, who, the Mona Lisa is. The painting is extremely well-known throughout the world, and R.A. Scotti’s non-fiction account “Vanished Smile: The Mysterious Theft of Mona Lisa” not only describes the obvious matter of the theft, but also its history, future and a summary of its creator, renowned Italian artist Leonardo da Vinci.

The account begins with the theft itself, giving readers the details—when she was stolen, what happened in the aftermath and the suspects in the crime.

After doing this, Scotti retraces her steps and begins to tell the story of Mona Lisa herself. She talks about the theories of who Mona Lisa actually is, why and how da Vinci created her, and finally, how she became such an international icon – mainly through the theft, in fact – and what became of the people involved with the theft.

The book ends with “Mona Lisa” in her present state in the Louvre, along with a description of her annual checkup and the number of people that visit her annually (approximately 500,000).

Scotti has obviously done her research, as she provides a very fact- and detail-based account of how “Mona Lisa” was stolen, who stole her, how she was returned, and even how the Louvre was set up in 1911 when the theft occurred.

It can’t help but be wondered, however, if some of the anecdotes are rather embellished at times to make the length of the account longer, as it is only 227 pages. The other possibility is that there is simply not a lot of information about the theft, and that is why so many different and somewhat obscure theories are included in the account as plausible.

There were instances, nevertheless, where interesting historical facts were added to the account that ended up giving it a fascinating perspective. For example, at one point, the author talks about how Franz Kafka and Max Brod were vacationing in Paris at the time of the theft and their supposed reactions to “Mona Lisa” missing.

On the whole, Scotti presents an interesting account of the “Mona Lisa” for people who do not necessarily enjoy reading history or art textbooks. The reader gets a history, art and biographical account all summed up into one document that makes for a captivating, though rather short, read.