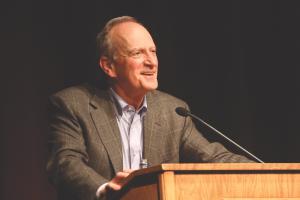 Ethan Magoc photo: The national coordinator of the first Earth Day spoke at Mercyhurst College on Wednesday, April 28. His presentation took place a week after the College’s Earth Week Celebration.

Dr. Chris Magoc, jokingly referred to as “Lord Governor” of the Green Team, introduced the speaker by recounting Hayes’ achievements and congratulating the Mercyhurst community for a successful Earth Week.

In particular, Magoc praised the impending switch to 100 percent wind energy, which will greatly reduce the college’s carbon emissions.

Magoc asked students to remember Sister Maura Smith, who prompted the movement for sustainability on the Mercyhurst campus.

“All of us doing this work today are standing on the shoulders of Sister Maura,” he said.

After Hayes took the stage, he joked that Magoc’s extensive introduction was “wholly inadequate.”

This good humor tempered his largely political, and at times controversial, presentation, “Forty Years after Earth Day: Victories, Failures and the Road Ahead.”

With anecdotes, Hayes recounted the history of Earth Day and the subsequent environmental movement.

On April 22, 1970, Earth Day marked the birth of the modern environmental movement.

Approximately 20 million Americans called for ecological reform, making the first Earth Day the biggest single outpouring of people for any single issue in American history, according to Magoc.

“At a time where the country was being torn apart at the seams, (Earth Day) was a cause that brought people together,” Hayes said.

Hayes said that for any cause to succeed, people “need a small number of people who care intensely,” but the call for clean air and wilderness protection sparked the passions of millions of people.

During this time, residents of San Francisco breathed such polluted air that breathing was the equivalent of smoking two packs of cigarettes per day.

Hayes said, “A two-month-old can’t do that.”

“There was a lot more emotion, a lot more intensity and a lot less sophistication at the beginning of the movement,” Hayes said.

Hayes then spoke to the audience, noting that to them, “The first Earth Day is probably regarded like the siege of Carthage—way back there.”

He urged contemporary environmentalists not to be afraid of being seen as “extremist,” and he encouraged students to adopt a hopeful attitude toward conservationism.

“What is the evolutionary advantage of pessimism?” Hayes asked. “There isn’t one.”

Hayes pointed out that the first generation of computers, which could fill several rooms and needed several people to run them, could not do anything that couldn’t be accomplished on an iPhone.

Freshman William Larkin said he thought the presentation was informative.

After the presentation, the audience had the opportunity to ask questions.

Freshman Loan Vu said, “After this, I want to take an environmentalist class.”