Listen above to excerpts from an interview with WMCE Station Director Michael Leal.
— 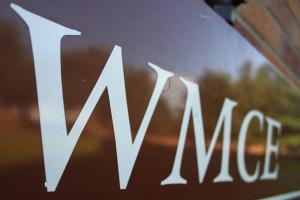 Photo by Ethan Magoc/The Merciad: Ratings at WMCE 88.5, Mercyhurst’s campus radio station, are higher than at any point in the station’s 21-year history.

Jazz on Erie radio appears to have harmonized well with local listeners and at Mercyhurst College during the past 18 months.

Shorty after switching its content type, Arbitron calculated WMCE as having less than 11,000 weekly listeners.

With the constant need for listeners to financially support the station, the previous classical mix simply wasn’t helping the station grow.

“We needed to find a format that could support itself,” said Michael Leal, who began as WMCE’s station director in May 2007. “In public radio, we don’t play commercials. We have to find funding from the listeners.”

When fall 2009 ratings came out, WMCE jumped 2,000 weekly listeners.
And the most recent round continued Mercyhurst’s positive trend, putting the station at 13,500 weekly listeners, 37 percent of whom go to 88.5 as their first choice on the dial.

“The station has just become a lot more listener-conscious,” said fifth-year senior Pete Marjenin, a student employee at the station, located in the basement of Baldwin Hall, since his freshman year. “I think we have a great jazz following in Erie.”

Judging by the numbers, the growing loyal target audience of WMCE––adults 45 and older––would seem to agree.

Based on Arbitron’s spring 2010 ratings, the station now has more listeners than ever, dating to its inception in 1989, when it began playing classical music and mixing in campus sports broadcasts.
Erie’s only all-jazz station also stacks up well against the local NPR affiliate, WQLN.

But during the afternoon and into evening hours, before most listeners trade the radio dial for the television remote, WMCE tops WQLN’s programming of classical music and All Things Considered (NPR’s main news program) among 50-plus listeners.

One such newly-devoted listener is Patricia Tellers, a 66-year-old retired teacher from the Erie School District.

About a year ago, Tellers joined JazzErie, a 15-year-old local organization promoting awareness of jazz music.

WMCE has helped to spread that mission “by opening some doors for me,” Tellers said.

“I was never a big jazz person,” she said, “but now in the car, primarily, or alone in the house, I’ll tune in.”

With a 60 percent budget cut since 2007, WMCE has capitalized on devoted listeners like Tellers to stay alive and begin to thrive, as evidenced by the ratings.

The biggest listener demographic missing at this point from Mercyhurst’s campus station?

“For the most part, not many on campus are even aware that we’re here or of what we play,” Marjenin said. “It’s kind of disappointing.”

But Leal offered his 23-year-old daughter as an example of why he doesn’t see students automatically shunning WMCE’s current programming.

“This generation (current students) listens to different kinds of music. When I was growing up it was all top 40,” he said.

Given the widespread iPod craze and the ability to obtain music online at any hour, students now access all music types, including jazz, more easily than before.

“With today’s technology, students are listening not only to what they like, but experimenting with different genres of music,” Leal said.