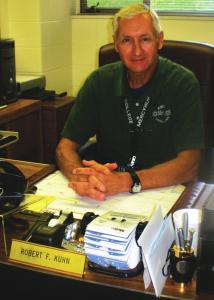 Not only does Kuhn meet the requirements for the job, he also has a personal connection to the school.

This personal connection began on Sunset Boulevard, where Kuhn lived for 25 years. There, the campus and Sisters of Mercy became a part of his life. He grew up a Catholic, and went to St. John the Baptist grade school just 12 blocks away from campus.

“It’s kind of fun coming back here at the end of my career,” said Kuhn. “It’s a wonderful campus; it’s beautiful. (There are) nice people here.”

Beside his personal connection, Kuhn is very qualified for the job, boasting a very impressive resume.

Kuhn spent 32 years in law enforcement before retiring from the Erie police force in March 2004.

That same year he was hired as a detective for the Erie County District Attorney’s Office. He worked there for six years, while working with the FBI for two, he said.

Being a college police chief is like an operating system on a computer, “(It) doesn’t do much, but makes sure all the work gets done,” Kuhn said.

Kuhn’s job requires him to manage the budget and watch the manpower, making sure he is never short-staffed.

“(I) keep my finger on the wheel and make sure the wheel keeps turning,” Kuhn said.

Kuhn has some lofty goals for the Police and Safety Department.

“I would like to see an upgrade in the current structure and the pay,” Kuhn said. “The reason is the retention aspect of the job. People would use this as a stepping stone to move on to another police department.”

Kuhn would like to see fewer part-timers and more full-timers on staff, hoping they become part of the Mercyhurst community.

“I’d like for them to get to know everybody and stay here for a long time,” said Kuhn.

Kuhn carries an optimistic attitude with him every day. He hopes to lead the Police and Safety Department beyond everyone’s expectations.

More importantly to him, he wants to continue to protect and keep the Mercyhurst community a safe place for students to call home.