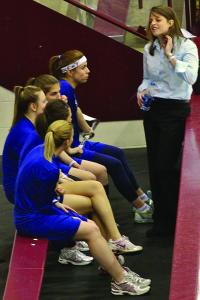 On Sept. 12, shock and devastation were the feelings running through both Sisti and Colontino when they heard a drunk driver hit Cameron, an assistant coach for the women’s hockey team, as she was biking.

“I was shocked and saddened when I heard the news,” said Colontino. “It was our day off and when you have such a busy week, you use this time early in the season like Kristen who used her day off to take a bike ride. It’s the last thing you expect.”

“I was devastated. She was just going out for a bike ride to stay fit and then she gets hit by a drunk driver,” said Sisti. “I was called and they asked me to come down to the hospital and I went there right away.”

Sisti up staying by Cameron’s side throughout the night and the next day.

“The entire Mercyhurst Lakers Hockey family is devastated by this terrible tragedy. Our thoughts and prayers are with Kristen and her family during this difficult time. Kristen has always been a tremendous role model for us girls.,” said Bendus.

“Last year she was behind us providing support and encouragement during the hockey season and now we are behind her as she battles to recover from her injuries. Her strength, will, and fight are inspiration for the entire team to have the most successful season we’ve ever had.”

The Lakers have rallied to support Cameron, sending her story to various news stations. They plan to wear a patch on their jerseys this season with the initials K.C.

Cameron came to Mercyhurst to join the Organizational Leadership Program, help coach the Lakers and work as a graduate assistant in the anthropology department.

“Every two years we bring in volunteers to learn the ropes of women’s college hockey at the highest level,” said Sisti. “When she came in, our past graduate assistant had just left and our goal with all these assistants is for them to move on to become a full-time coach and that was the goal with her.”

According to Sisti, she was excelling at the tasks she faced as an assistant coach.

“She is a great coach. The girls really look up to her competitiveness and how she is so ambitious and always striving for excellence,” Sisti said.

The Lakers will play in an exhibition game against Wilfrid Laurier University at the Mercyhurst Ice Center this Saturday at 2 p.m.

They will go into this game with a K.C. on their jerseys and Kristen Cameron on their mind.