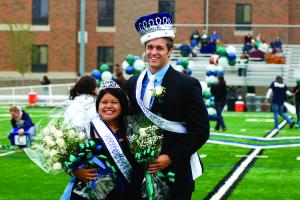 Nick Glasier photoWhat do you study here at Mercyhurst?
Dave Williams: “I am a finance major with an economics minor.”
Amber Kissman: “I’m a biology major.”

What clubs or organizations are you involved in?
D: “I am in the business club, the Leadership Certification Program and I was the Student Chair of Summer Orientation and Welcome Week.”
A: “I am a member of the Student Ambassadors, as well as a freshmen area RA. I’m also in the fencing club, the astronomy club and tri-beta (National Biological Honor Society).”

What are some of the hobbies and activities you enjoy? Is there anything special you like to do in your free time?
D: “I love health and fitness. Working out is fun to me and I love reading about it and writing programs for myself and other people. I also like to sing and play guitar, and play intramural sports.”
A: “I enjoy scrapbooking! I also enjoy insect collecting, yoga, spending time at Presque Isle, and the performing arts.”

How does it feel to be chosen as the Homecoming King and Queen for this year? Were you surprised? How did you react when they announced that you won?
D: “It feels great to be chosen as the Homecoming King; it really is an honor, and I want to thank everyone who voted. My dad was the Homecoming king at Hiram and my brother won it two years ago here, so it’s pretty cool that we all got to win it. When I found out
that I won I think I was just laughing at my friends in the stands because they were providing some great ‘support.’”
A: “It felt amazing! I was very surprised when it was announced that I won homecoming queen. I had no idea that many people knew who I was! It is such an honor to be chosen as homecoming queen! It’s all been such a cool experience! Thanks to everyone!”

As a senior, graduation is just around the corner. What are your plans after graduation?
D: “After graduation I really don’t know what I want to do. I have thought about moving to Denver to be a personal trainer for a couple years. I’ve also thought about joining the Marine Corps through the OCS program to be an officer.”
A: “I would like to attend graduate school somewhere in Ohio to study entomology (which is the study of insects).”

Where do you see yourself 10 years from now? What do you hope to have accomplished?
D: “In 10 years I just want to be living and working somewhere where I feel like I really belong. After that, everything else will fall into place.”
A: “In 10 years I hope to have earned at least my master’s degree in entomology and hope to have landed a groovy job at an environmental center or natural history museum where I can teach people of all ages about bugs.”

Looking back over your time here, what is one of your best memories of your time here at the ‘Hurst?
D: “It’s hard to pick a favorite memory here… I would just say those random, uneventful nights that just end up being epic. I think we’ve all been there.”
A: ‪”I especially enjoyed performing in “Seussical the Musical” my freshmen year. I had the role of Jojo the Who, I was also really excited about getting a “B” on a calculus test!”