Twenty Penn State Behrend students were arrested and jailed the afternoon of September 30. 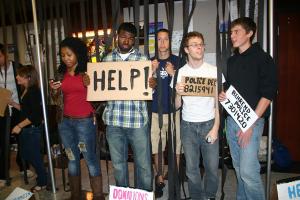 The reason: these students were nominees for the fall 2010 Homecoming Court. The goal of the fundraiser was to solicit passersby and friends into “bailing” them out of jail with cash donations, which went towards breast cancer awareness and research. The five students of each gender with the highest total will make up the 2010 Homecoming Court.

The unrelenting “warden,” and president of the Homecoming Committee, Andrew Iams, kept close watch on his prisoners, but emphasized the real point was raising money for a good cause.

“Jail and Bail was a huge success and a very positive turnout, especially for the first day,” Iams said.

The event, sponsored by the breast cancer benefits group Linked by Pink, is first a way to determine which nominees for homecoming court would be in the final cut, as well as a means to collaborate as a student body in order to raise money for an altruistic cause.

Also, as Behrend has been without a homecoming for the past two years, the fundraiser was a way to raise awareness and heighten excitement. Instead of being restricted to simply fliers, posters and window paint, the Homecoming Committee was able to effectively permeate the student body through the nominees, who spread the word to friends and potential donors.

“It was really inspiring to see how much money students were willing to donate to breast cancer research,” Iams said.

The two days of fundraising, in only two hours for each day, raised over $2000, according to a release sent by the homecoming committee Sunday.

Gannon University now disciplines misbehaved students on a point system. Upperclassmen are exempt from the system, but subsequent freshman classes will abide by it.

However, Student Living has allowed upperclassmen to use this new system if they choose.

In past years, students were disciplined on a three-strike basis. If he or she committed three infractions, they were put on probation.

Not only does the new point system cover alcohol and drug infractions, but it also covers conduct and behavior infractions, fire safety infractions and household related problems as well.

Additionally, there are also minor offenses, such as having pets in rooms, smoking in dorms or apartments and possession of alcohol if underage.

There are different sanctions that will be enforced for these infractions. If a student reaches 10 points in the system, for example, the student could suspended or expelled depending on a review by the Student Conduct Office and Dean of Students.

Sue Majocka, the Student Conduct Officer and Harborview Resident Director, who is in charge of the new system, said the point system has been a success so far.

“So far it seems to be working,” she said. “Most students that I’ve dealt with haven’t had a negative reaction.”

Majocka said that students now have more understanding as to what they need to do in order to avoid adding points to their name.

“The point system helps to make things a little more concrete for students,” she said. “Before we just had our disciplinary statuses with a warning, official warning, probations and suspensions.”

Students have varying opinions on this topic. Alyssa Perkowski, a freshman nursing major disagrees with it.

“I think it’s nice to keep people in check but I also think it’s a little harsh,” she said. “I think there should be more ways to lower your points once you have accumulated them.”

Perkowski also said that she wishes the university would deal with students on a more mature basis.

“Personally, I’m not real big on going out anyways just because there are lots of risks, but I think people are willing to break the rules,” she said. “But it kind of sucks that we’re in college and were getting treated like little kids again. People come to college to have freedom and grow up.”