Mercyhurst and Edinboro team up to fight cancer 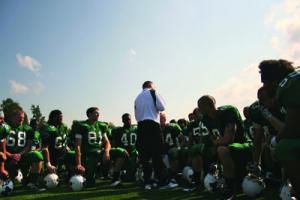 Ethan Magoc photo: Schaetzle has been a leading force in the Mercyhurst College’s “Making a Point to Take Away Cancer” campaign.
The Mercyhurst College football team beat local rival Edinboro University Saturday in an exciting overtime. However, this game represented more than a friendly competition.

As part of Edinboro’s “Cancer Awareness Day,” the two teams played to raise awareness and funds for the Kanzius Cancer Research Foundation.

“Everyone has been touched in some way by cancer,” Head Coach Marty Schaetzle said. “We’ve had two of our own in the past few years fight testicular cancer. This is just a small way that we as a football team can help contribute to fight against cancer.”

“This is more than a game,” Browning said. “It’s about Edinboro and Mercyhurst uniting and fighting this disease.”

Battling on the field for bragging rights only helped fight this disease.

“Yes, we (had) a big football game, but playing to fight cancer really put things in perspective,” Browning said.

“During the season, we get tied up with what happens on Saturday and lose perspective of what’s really important,” Schaetzle said.
Both agreed that what was really important this past weekend was bringing awareness to this horrible disease.

To go along with Edinboro’s “Cancer Awareness Day,” all cancer survivors were admitted into the game for free, and were recognized before the start of the game.

Donations were taken to benefit the Kanzius Cancer Research Foundation and fans were encouraged to donate to the “Make a Point to Take Away Cancer” campaign.

“As coaches, we raise money for projects, such as a new locker room or new equipment, but I think it was more important to redirect our efforts to something bigger,” Schaetzle said.

This game definitely meant more to some of the players.

Both teams have been affected in some way by cancer. Mercyhurst’s Garrett Kensy and Jeffrey Pollard are both cancer survivors, and Edinboro’s Cody Harris has seen his mother battle breast cancer the last two years.

“I have great admiration for Jeff and Garrett,” Browning said. “It affects all of us in a negative way.”

Harris’ mother was an honorary captain and assisted with the coin toss this past Saturday.

“What coach Schaetzle and the football program are doing is of great value, no matter what the amount raised,” said Director of Athletics Joe Kimball.

The players showed their support by wearing pink wristbands and tape during the game.

The Lakers roll into this weekend with an overall record of 5-2, 3-1 in the conference. They bring with them a lot of momentum, coming off two huge wins the past two weeks.