While the majority of students went home for fall break, men’s soccer – who were ranked number 4 in the nation last week – was on the road for the whole four days in New York, and Washington D.C.

They did not complain or moan about having to play during break but instead continued to win games. 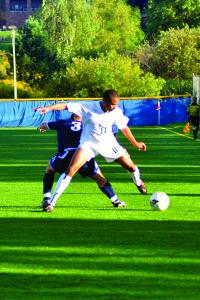 The Lakers then traveled to Washington D.C to face The University of the District of Columbia defeating the Firebirds 4-1.

The team certainly racked up the miles on the bus this weekend while most other students were with their families. The players, though, didn’t mind.

“It’s a commitment that all of us made to play soccer, and the road trips are always a lot of fun with the guys,” senior Tommy Lund said.

Lund does admit that it is much easier to enjoy the long away trips when the team is winning.

“If you’re losing it can be a terrible trip, but when your winning it makes the whole trip better,” Lund said.

Lund, who hails from South Euclid, Ohio, said he would have just gone home for a few days if he didn’t have soccer, although he was happy to be away with the team.

Graduate student Dale Young didn’t have the same options as he is one of 10 foreigners on the soccer team who would not have been able to make it home for the break.

Young, who is from Birmingham, England, said, “It’s good to be out on the road with the soccer boys because I would be with them anyway. It’s great to get on the bus and have a bit of banter with the boys.”

With the break being so short, many of the foreigners would have been limited for choices for the break.

“I would have either stayed in Erie and been bored or I would have had to spend money and go somewhere, so it would have been a lose-lose. At least this way I’m with the lads the whole time, and were winning games and seeing big cities,” Young said.