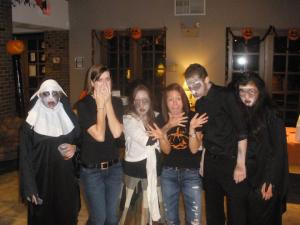 The program that earned Mercyhurst the award was none other than the popular annual event “Haunted Hurst.”

The award was presented during the NACA’s Mid-Atlantic Regional Conference in Lancaster from Oct. 14-17.

About 110 schools attended the conference.

The NACA was founded in 1960. Today, they have more than 1,000 college and university members, as well as almost 650 associate members including artists, lecturers and performers.

“Haunted Hurst” has been a tradition at Mercyhurst for many years.

It is run by both Student Activities Council (SAC), led by senior SAC chair Char Lichtinger (under the direction of SAC adviser Sarah Allen), as well as the Ambassador Club.

“Haunted Hurst” is one of the most well attended campus events, and demonstrates creativity and innovation, while appealing to a diverse body of students.

As with any major program, “Haunted Hurst” has obstacles to overcome in order to run smoothly.

For instance, each year the program can involve upwards of 25 student planners who are responsible for coordinating the event.

Also, there are those student volunteers responsible for scaring people during the haunted tour.

Although it can be difficult to work with so many people to plan and run one event, it provides the opportunity for student planners to learn to work together as a team.

Despite some small difficulties, the resulting program is always a success, with an average of 300 students attending each year.

According to their mission statement, NACA “advances campus activities in higher education through a business and learning partnership, creating educational and business opportunities for its school and professional members.”

The Mid-Atlantic Conference itself provided a multitude of events such as educational sessions, showcases, as well as an opportunity for networking and professional development.

This year’s educational sessions included such topics as “Enhancing Your Resume Through Leadership & Involvement” and “Bringing Together Programming Board And Residence Life Events.”

The conference also involved award ceremonies where awards in several categories were given. “Haunted Hurst” won the Outstanding Social Program award under the category of programming awards.

NACA’s criteria used during the judging process include the “effective use of available resources (financial, human and logistical) including co-sponsorship” and the “effectiveness of programs with relation to their stated goals.”

It was also a requirement that the program “must have been administered and managed by the college/university activities board or campus programming office where students are significantly, if not completely, involved in the decision making, planning and presentation of the programs.”