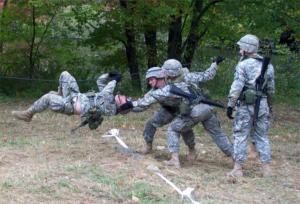 Contributed photoYou have likely seen ROTC cadets around campus, in the gym or in your classes in uniforms.

One thing you may not know is the Army ROTC has its own varsity sport.

Ranger Challenge is the name of a weekend-long competition where University ROTC Battalions send their toughest, most well-rounded Cadets to compete for the “Iron Mike” trophy, and bragging rights for the next year.

The competition originated as a collegiate version of the annual Best Ranger Competition, held at Fort Benning in Georgia. Cadets compete in not only physical events, but skills, and knowledge based challenges, while pushing themselves through exhaustion.

All universities that host ROTC programs in the Northeast Region of the U.S. belong to the 2nd Brigade. Mercyhurst falls under the “Pride of Pennsylvania” Battalion which is made up of over a hundred Cadets from Gannon University, Mercyhurst College, and Penn State Behrend.

Cadets from each of the schools know each other very well and participate in Battalion activities together several times each month.

The team’s camaraderie and bond integrity is unmatched by most other teams. Team members share the uncommon bond of training to commission as US Army Officers upon college graduation. 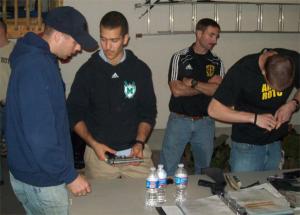 The team members showed their spirit, and honored a retiring 38-year Army veteran, LTC. Ronald Swift, by growing team mustaches during the season and competition; the female team members even sported the best fake ones they could find.

Preparation started last spring with Cadets meeting two days a week to train on skills that would be needed during the fall competition. During the Fall, training became a six day a week regimen.

Team potentials gave up sleep, valuable study time, and much of their social lives to commit to preparing for the competition. Most mornings Cadets would wake up at 0445 so they might be on time to an intensive 0530 workout.

Where are you most mornings at 5 a.m.?

The team was determined by competing in individual tasks pertaining to the competition tasks for the highest scores. Once the Fall Semester started, over forty “high-speed” volunteers came to try-out for the team (by mid October, only a ten-person team would compete).

Cadets departed Oct. 15 and traveled by van for eight hours to Camp Smith, N.Y., a few miles away from West Point. Once on site, they began preparing for the arduous weekend full of events.

The competition kicked off with a 0415 wakeup Saturday morning for an Army Physical Fitness Test (APFT). Following the APFT cadet teams moved on to compete in a long list of events: Weapons and communication in an Engagement Skills Trainer (EST); A team scenario mission [involving: Military Operations and movement in Urban Terrain(MOUT), engaging enemy targets, Reaction to Unexploded Ordinance/Improvised Explosive Device props, and treatment and evacuation of a casualty under enemy fire]; construction and crossing of a “single-rope” bridge over an obstacle; Land Navigation; Weapons disassembly, reassembly, and functions testing; and a written exam covering ROTC course material from Freshmen-Senior study levels. 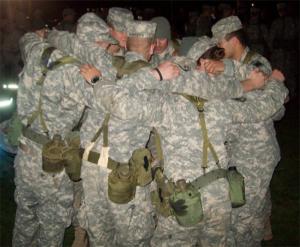 Contributed photo
On Sunday morning, the tired teams awoke at 0500 am to prepare for the final event, a six mile ruck run. The team departed carrying a 35 to 40-pound pack and an additional 20 pounds of weight in the form of weapons, helmets, and water. Although far cry from a cross-country race, CDT Tyler Payne from Penn State Behrend, led the way in the formation carrying the Pride of PA Guide-On (unit flag). The course route wound its way directly up a steep gravel road to the top of Bear Mountain and back.

The Pride of Pennsylvania Battalion finished the competition in top ten in every event but one. Overall, the team placed seventh out of 23 teams, while competing in the hardest division.

Another 20 teams competed the following weekend, though the final results have yet to be posted. The team for the fall 2011 season is starting to plan their training for next year’s competition.