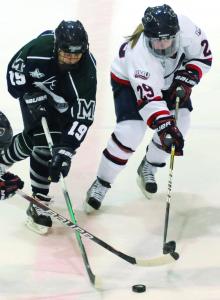 Sophomore defenseman Stephanie DeSutter fights for the puck.The Mercyhurst College women’s hockey team may be facing some of the greatest expectations ever faced by a Mercyhurst team.

Midway through the year, the Lakers have not been setting the world on fire as expected but have instead looked somewhat shaky at times.

“I guess it is good to think that we spoiled some people with how good we have played in the past and with all the accomplishments we have amounted,” head coach Michael Sisti said. “This year, though, we are still looking to get some consistency.”

On top of the pressure to make it to their third consecutive Frozen Four, the Lakers are also grappling with the success of last year’s team.

“I think every season brings on new challenges,” said Sisti. “Last season, the challenges on the ice were easier, but off the ice the challenges were there. This season has been an odd one where we will have challenges, and they will go away for awhile but then come back up.”

The women’s team has compiled a 10-2 record to this point. They are currently ranked third in USCHO’s poll.

The Lakers’ strongest win came against second-ranked Cornell University, the team that eliminated them in the NCAA semifinals in March.

The Lakers won 4-3 this time in a thrilling overtime that ended with a short-handed goal by assistant captain Jesse Scanzano.

“The Cornell game was our game against a very good team,” said Sisti. “We were down three times but we fought back to win.”

The issue with the Lakers is their two losses that have come against sub-par opponents.

The first came at Bemidji State University in Minnesota, a program with a current record of 6-6-2.

The Lakers beat Bemidji State in game one of the series but lost 5-3 on the second day.

The most disappointing loss of the year came at Niagara University just three days after the Cornell victory. Niagara owns a 3-10-3 record.

The main culprit in these slip-ups has been inconsistent play.
“It has been something we have been really fighting, and we have been paying the price for not playing up to those expectations,” Sisti said.

For the women’s team, senior captain Meghan Agosta and assistant captains Vicki Bendus and Scanzano have been as good as advertised.
Agosta is fourth in points and fifth in goals in the nation.

Bendus is ranked fifth in assists and tied for ninth in points following her Patty Kazmaier-winning season in 2009-10.

These three — along with the continued stellar play of junior Bailey Bram and the emergence of junior Kelley Steadman — have the Lakers leading the nation in goals per game at 5.25.

“We have a lot of good players with a lot of different forwards who can score,” Sisti said.

The Lakers host Niagara this weekend for two more games before traveling to St. Lawrence University next weekend.