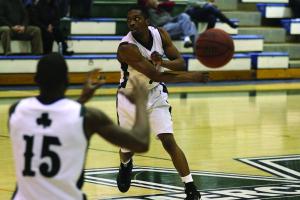 The Mercyhurst College junior guard Jamal Turner makes a no-look pass in the Lakers’ 92-66 victory over Lake Erie College. Last season, the Mercyhurst College men’s basketball team posted an 18-10 record, went 8-6 in the Pennsylvania State Athletic Conference and made an appearance in the PSAC Championship Tournament.

After losing 76-69 to Clarion in the PSAC Tournament quarterfinals, the Lakers also lost nine players from their roster; eight graduated and one transferred.

Three are Division I transfers, one is a junior college transfer and three are freshmen.

“We have a lot of new guys that have to adjust to our system,” Manchel said. “We need them to be committed to defense, grind for victories and be able to stay under control on both ends.”

The new additions to the roster will join the five returnees from last season, including senior guard Heiden Ratner who already has a PSAC Player of the Week honor under his belt this season.

“He is a kid that can really score for us, and he is a very good defender too,” Manchel said of Ratner, who led the team last season in scoring average with nearly 16 points per game.

All four players have already proven they are essential elements to the Lakers’ lineup this season.

Leao leads the team in rebounds—averaging 8.3 per game.

Dupiton has already shown prowess from the foul line and managed 10 rebounds in three games.

Although only three games into the 2010-11 season, the Lakers are 3-0 and have beaten all three opponents by at least 10 points.

In fact, they stomped Lake Erie College by 26 points in Saturday’s home opener.

Each new season brings new goals and expectations, but one remains the same.

“I think this season is like every season. We want to be able to compete at the top level of the PSAC and make it into the playoffs,” Manchel said.

The next few games for the Lakers could be crucial predictors of this season’s tone.

“The next two games are going to be good tests. Urbana, although 1-7, has played a really tough schedule, and last year they beat Gannon, Edinboro and us,” said Manchel, noting that Mansfield, the team’s Dec. 6 opponent, is undefeated. “(Mansfield) will let us know where we are early in the season.”

After Thursday’s trip to Urbana, Mercyhurst will play at home Dec. 6, 11 and 12.