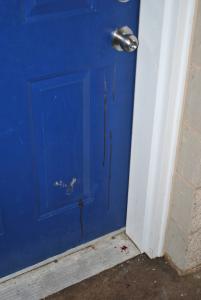 Freshman Adam George Miller, 19, of Warren, was arrested by the state police and placed in the Erie county jail. He was also found with a large amount of marijuana, according to Pennsylvania State Police.

Charges against Miller include three counts of burglary, aggravated assault, simple assault, possession with intent to deliver, and several summary charges. The bail is a $10,000 straight cash bond.

Behrend junior Richard Vetica was a resident in one of the apartments that was broken into. He was asleep when the assailant entered.

“At 6:30, I heard a bunch of stuff slamming around. It sounded like someone was drunk and mad, and then I heard stuff shattering, bottles breaking,” Vetica said. “At first, it didn’t even cross my mind someone had broken in, so I went back to bed. My other roommate was there too, but he went back to sleep.”

Vetica described the scene in the disheveled apartment once he got up to investigate.

“I waited until it stopped and went outside. There was blood all over our apartment.”

A television had been split in half, and a laptop broken, Vetica said. Numerous holes marred the walls. It was assumed that most of the damage had been done by a “heavy duty” snow shovel that the residents used for their sidewalk, the metal head of which seemed to have broken off when it collided with the tile of the kitchen floor.

“Our door was unlocked, so it’s not like he broke the door down, but he had never been in our apartment before,” said Vetica.

A distinct trail of blood, perhaps from the suspect’s break-in of Hungry Howie’s, was visible from the 1100 block to the 800’s, where Miller allegedly broke into a second apartment and assaulted a female student.

A concerned neighbor of the girl reported, “After trying to enter all of the apartments on the lower level, he broke into hers. The door was unlocked, but they were sleeping, and he, apparently unprovoked, just hit her.”

When asked about the victim’s condition, the neighbors said that she seems to have recovered physically, aside from some residual bruises.

However, the mental recovery has been much more taxing.

“She hasn’t been back to classes yet, and has gone home for a few days to get better,” said the neighbors.

Like the rest of the students at Gannon University, the men’s basketball team’s players are in the process of knocking off the rust of winter break and getting ready for the second half of the regular season.

Despite back-to-back 11-day layoffs and an 11-day absence from their home court, the Golden Knights managed a 7-2 record, including a Porreco Cup tournament win, since December 7th.
With the new semester underway, so too is the heart of the Golden Knights’ schedule– PSAC West play.

“The league is very strong. This year is probably as strong as it has been in a long time,” Reilly said.

Gannon caught the brunt of the conference’s strength immediately when the Golden Knights had to go on the road to take on the league’s defending champion. The Knights fell flat in the second half of their PSAC opener losing Wednesday, eventually losing to Indiana (Pa.) 65-45.

Gannon gave the Crimson Hawks all they could handle in the first half, battling Indiana to a four-point halftime deficit. The Golden Knights, however, could not carry the momentum into the second half, as Gannon was unable to net a field goal until the 14:33 mark in the period.

In all, Gannon shot just 31 percent from the field, its lowest performance in more than a year. Kareem Brown led the stagnant Knight offense with 11 points, while Kelvin Agee chipped in with 10 of his own.

In its return to the friendly confines of the Hammermill Center, Gannon notched its first conference win with a 70-43 rout over Lock Haven Saturday.

The Knights, however, received substantial resistance from the Eagles, who, despite coming into the game having lost 21 of their last 23 dating back to last season, sent Gannon into halftime with just a 30-28 lead.

Out of the locker room, the Knights took a page out of Indiana’s playbook by putting the clamps down on defense, not allowing a Lock Haven basket for the first eight-plus minutes of the second half. During this time, the Golden Knights ripped off 15 straight points to send themselves to their first conference win.

Gannon’s offensive success was due, in large part, to the team’s domination down low, as the Golden Knights outscored Lock Haven 26-6 in the paint while collecting 50 total rebounds.

The Knights’ charge on the boards was orchestrated by Brannen and freshman forward Stephen Battle, who each snatched 11 rebounds.
For his efforts, Battle was named the PSAC West freshman of the Week for the second consecutive week. The honor marks the third week in a row and the fourth time this season that a Gannon first-year has taken received the accolade, the other two belonging to Kelvin Agee.

The youthful exploits have not gone unnoticed for Reilly, who attributes much of the team’s success to the diaper dandies.

“We’ve had wonderful contributions from our younger players this season. Both Stephen Battle and Kelvin Agee have earned starting spots and improving with each game,” Reilly said. “I think it could be a preview of what is to come for this team.”

As for now, Reilly said his team is focusing on its upcoming opponents as the Knights make the short trip to Edinboro Wednesday before hosting California (Pa.) on Saturday.

“We know that in any given time we can beat anyone, but we can also be beaten by anyone, so we’re just taking it one game at a time,” Reilly said.