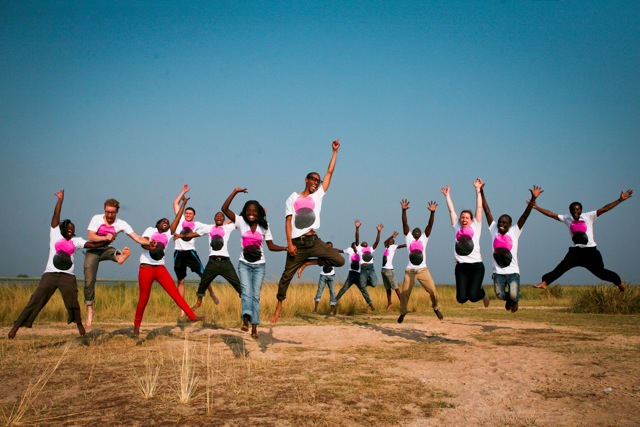 The children of Uganda inspired the stars of “Invisible Thread” (Griffin Matthews, center and Matt Gould, second from left) to turn their experiences into an award-winning musical.

Mercyhurst University is excited to welcome the creative minds behind the emotional musical “Invisible Thread” at the Mary D’Angelo Performing Arts Center this Wednesday, Sept. 9 at 7:30 p.m.
“Invisible Thread,” previously titled “Witness Uganda,” is a Broadway-bound musical written by Griffin Matthews and Matt Gould.
It blurs the boundaries of real life and theater and tells the true story of their experiences as aid workers in Africa.
“Invisible Thread” engages audiences as it weaves poetic lyricism throughout spoken word, musical theatre and Gospel.
Not only is the musical fascinating in of itself, but also the background of the creators tell another inspiring story.
Griffin, like anyone in their 20s, was determined to find his place in the world.
He arrived in Uganda to help build a school, but when he met a group of destitute, orphaned teenagers, he left his job and volunteered for a charity in Africa.
This becomes an unexpected, yet profound, journey that changes his, and their, lives forever.
Matt Gould is the co-writer of the two-time Richard Rodgers Award-winning musical, “Invisible Thread.”
The compassion is thrilling; “Invisible Thread” uplifts everyone’s heart.
Hence, the one-night only performance is a privilege to Mercyhurst students.
Having a chance to meet the creators Griffin Matthews and Matt Gould is not the only highlight of the night.
The show will also present the music from their award-winning show before it premieres on Broadway this upcoming fall, alongside a local Gospel choir.
Griffin and Gould dedicate these songs to people across the world who are fighting for their right to love whom ever they choose.
“Invisible Thread” infuses a world pop score with African beats in the journey of a man battling to find his place in a world full of injustice as he asks “Is changing the world even possible?”
The event will happen in the Mary D’Angelo Performing Arts Center on Sept. 9 at 7:30p.m.
Tickets are $20 for adults, and $5 with Mercyhurst ID.