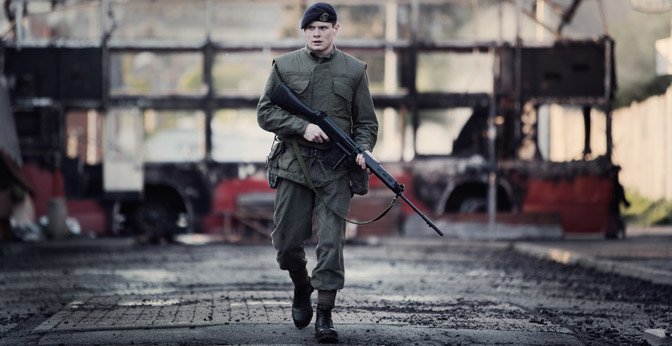 This Sunday, Mercyhurst University’s afternoon movie series will resume in Taylor Little Theatre.
This weekend’s movie is called “’71,” a 2014 British historical action film.
Set against the sectarian violence of Belfast in Northern Ireland, “’71” takes place over a single night in the life of a young British soldier, played by Jack O’Connell, accidentally abandoned by his unit following a riot on the streets of Belfast in 1971.
Unable to tell friend from foe, and increasingly wary of his own comrades, he must survive the night alone and find his way to safety through a disorientating, alien and deadly landscape.
Directed by Yann Demange, the New York Times raved that “Mr. O’Connell runs away with ‘ ’71,’ in which his character’s every emotional, psychological and physical hurdle makes for kinetic cinema.”
Though the dialogue may be difficult, “’71” is a rapid-fire story of the violent struggle in Ireland.
As the Times also claimed, it is “a rare film that locates viciousness and kindness on both sides of Northern Ireland’s Troubles.”
“’71” will be shown this Sunday, Sept. 13 at 2 p.m. in Taylor Little Theatre.
Tickets are $6 for adults, $5 for seniors, students and military, and $1 for Mercyhurst students with their ID.
Don’t miss out on the first of many great movies at the ‘Hurst!