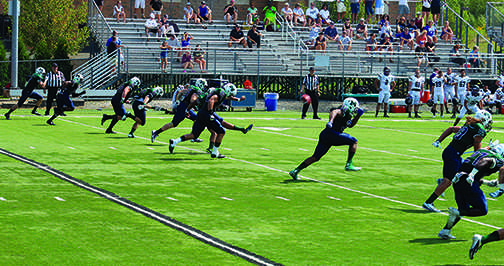 The Mercyhurst football team’s victory gave them their first season opener win in four years. Junior kicker Dylan Kondis (93) kicks the ball during a kick-off for the Lakers (pictured to the left). Kondis went 5 for 5 in kicking extra points during the game.

The Mercyhurst football team defeated the Bentley Falcons 35-20 in their season opener on Saturday, Sept. 5.

Mercyhurst’s offense started off strong with two touchdowns in the first quarter. The returning quarterback, redshirt senior Brendan Boylan, made these possible with throws to senior John Matarazzo and redshirt senior T.J. Latimer.

With another touchdown by senior Jaquan Williams, and an incredible interception by redshirt senior Tevin Stewart, the Laker’s offensive line continued their drive. The interception was made in the Falcon’s end zone, preventing them from scoring at that point.

In the fourth quarter, redshirt senior Brandon Brown-Dukes made his 30th career-rushing touchdown.This gave the Lakers a 28-20 lead.

Stewart made his second interception in the fourth quarter at the Falcon’s 10-yard line. He returned it 90 yards for a touchdown, making the score 35-20 to clinch the win.

Junior kicker Dylan Kondis went 5 for 5 in kicking extra points during the game.

After losing the first four games in the fall of 2014, the Lakers strive to “start fast and finish strong,” said Stewart.

“All spring we were just preaching to start fast, finish strong. We just made that a goal of ours, to start fast and that’s what we did,” said Stewart. This is the team’s motto for the season.

Stewart was named PSAC Western Division Defensive Player Of The Week based on his performance at Saturday’s game. This was his first time receiving this award.

Mercyhurst’s next game is at Tullio Field on Saturday, Sept. 12, against West Chester University of Pennsylvania. Kickoff is at noon.