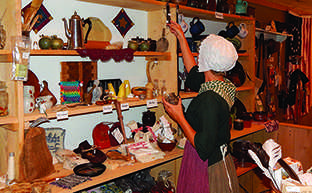 For her internship this summer, senior Rebecca Schratz dressed in period clothing from the 1700’s.

Senior Public History and Archaeology minor, Rebecca Schratz volunteered at the historic town of Tally Caveyall this summer, dressing up as a historically accurate, impoverished woman each day.

Schratz gave tours, taught summer camps and educated the public about the history of Allison Park during the late 1700s. To Schratz, the effort that went into creating a historically accurate persona of a woman that “was putting off marriage and had to work for money” was immense .

The village is located on the Depreciation Lands Museum in Allison Park, Pa. The museum itself focuses on interpreting the Settlers Act of 1792 when land in Pennsylvania was sold to settlers, ignoring the natives and their lands.

The clothing Schratz had to wear included a corset, two heavy skirts, stockings, petticoats, and a bonnet, among others. She spoke properly and learned to shear and spin wool just as a woman from the 1700s would have done.

“It teaches you a different appreciation for resourcefulness,” Schratz said.

Other than adopting a new persona, Schratz designed museum displays, planned events, worked in the archives, and conducted historical research, all while educating the public.

Her museum display consisted of a timeline of the Native Americans who lived in the area during the time. She made her own rope out of plant fibers for her display, as well as incorporated artifacts such as a musket and handmade ax.

“Being in that persona, I had to learn certain things that would be historically accurate,” Schratz said.

At Mercyhurst, Schratz works in the Archives at Hammermill Library, preserving historical documents that pertain to the Ambassadors club. During her internship, she was able to put her prior knowledge of preservation to the test. Schratz was given the task of preserving the original land grant of Tally Cavey, written on animal skin.

“It was super nerve-wracking,” Schratz said, at the thought of holding the more than 200-year-old document in her hands.

According to Schratz, this experience was crucial, as she wants to go into museum education when she graduates.