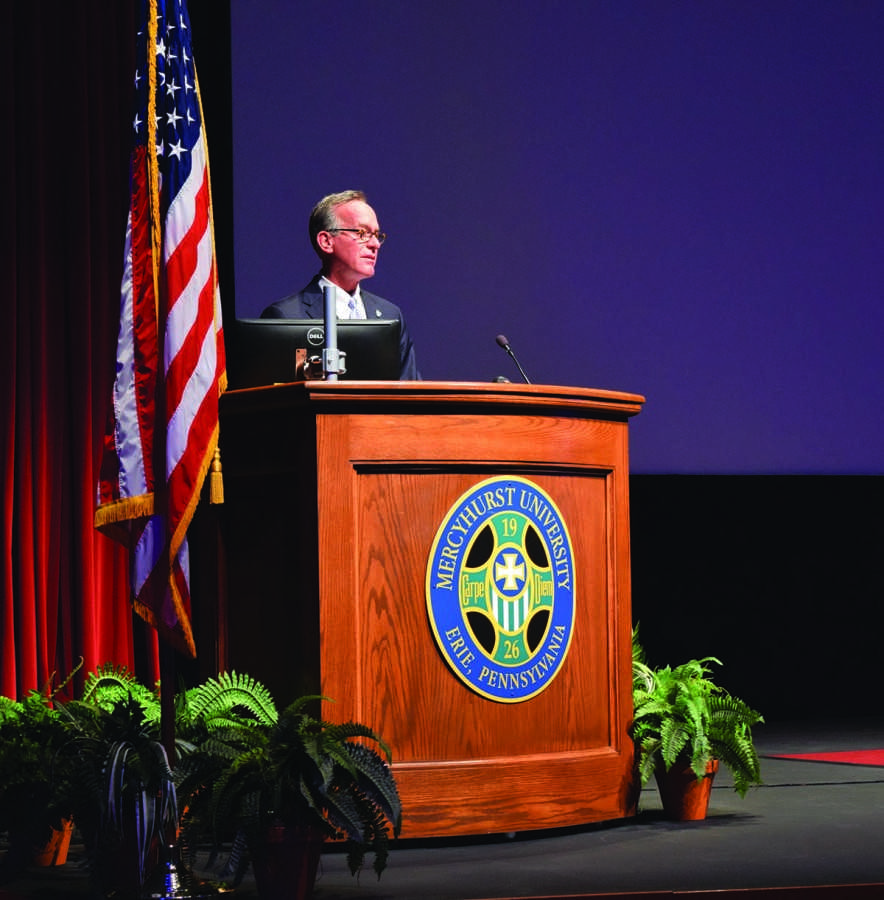 Through use of research-based problem solving, effective use of data, best practice and some collective sacrifice, President Michael T. Victor has promised to bring Mercyhurst University to a new pinnacle of prominence.
“We are on the cusp of a comeback. I can promise you that,” Victor said to a full audience of faculty and staff on Tuesday, Aug. 25.
Victor gave his inaugural State-of-University Address in the Mary D’Angelo Performing Arts Center. He highlighted many of the university’s recent accomplishments and outlined short and long-term proposals to improve areas such as admissions, finance and overall efficiency within the institution.
Introduced by David Dausey, Ph.D, chief of staff and vice president of academic affairs, Victor welcomed attendees with warmth and optimism.
“I can say, unequivocally, faculty and staff here are the best I’ve ever worked with,” Victor said.
He discussed problems that the university faces and how he plans to address them.
Mercyhurst’s student enrollment strategies are a decade behind their competition, according to Victor. He proposed to increase marketing and recruiting efforts and hire two new full-time admissions counselors.
In order to make these changes work within the university’s budget, he told employees that some departments must make do with less money in their own budgets.
The good news, Mercyhurst was named a College of Distinction and Catholic College of Distinction on Aug. 24. According to Victor, this will help with recruitment efforts.
“The next closest College of Distinction would be Allegheny College,” said Victor in an interview after the address.“It puts us into those types of categories: a more well-regarded school not only because of our programs, but also because of student experience, the Mercy mission.”
During the address Victor announced that thanks to Hoa Nguyen, executive vice president for finance and dministration, the university has a balanced budget with an expected surplus for the coming year.
Additionally, fundraising for the Office of Advancement was at an all-time high, bringing in $6.3 million last year.
After recognizing recent accomplishments of various athletic teams, Victor proposed upgrading athletic facilities and equipment. He also mentioned looking to revenue enhancements such as building bigger rosters.
“Expense levels for athletics are necessary,” Victor said, noting that it helps build reputation and raises the profile of the university.
Victor also noted that some cosmetic changes were made to the school.  Fifty dead trees and bushes were cut down and replaced with new ones. New flowers were also planted around campus.
One of the first changes Victor made in his new role as president was replacing the Carillon bells, which now ring daily throughout campus on the hour.
Victor assembled a new cabinet to help achieve his goals of a more efficient administration, which includes Nguyen, Jospeh Howard, Jeanette C. Britt, Sister Lisa Mary McCartney, PhD., Monsignor David Rubino, Ph.D., and Laura Zirkle, PhD.
To continue efficiency, he plans to consolidate the current colleges into four new colleges with new full-time and part-time deans.
“Right now we’re in the process of having faculty forums where we’re working out all the details and determining the size and scope of each of the schools, but it is in the process,” Victor said.
Based on student feedback he received, Victor expressed an interest in improving the core curriculum.
“We intend to make the core a more efficient and more beneficial for the outcome students expect while still maintaining a liberal arts core,” said Victor. “In other words, how is that going to impact the students with the ability to think creatively and think critically in the future.”
When asked about building any new traditions in a follow-up interview to his address, Victor revealed his surprise for students: Hurst Day.
“Hurst Day will be a day, a warm fall day, early in the fall. It will be a day that school will be called off. It will be announced by pipers and drummers playing in the quad,” Victor said.
According to Victor, the day that Hurst Day takes place is a secret, but he will send out an email blast the morning of to let everyone know.
“It will be a day filled with scavenger hunts by teams, very difficult scavenger hunts with huge prizes. There will be inflatable games, rock climbing walls, mechanical bulls, Velcro walls, dunk tanks, ice cream trucks, you name it, it will be here.”
According to Victor, many of the changes he has announced are still in the process of being discussed and finalized, but the administration and faculty are working together to build consensus.
“Everything we’re doing that you heard in my speech is all to move us forward quickly to be in a better position for students and faculty and everyone involved at Mercyhurst to better fulfill our Mercyhurst mission,” Victor said.