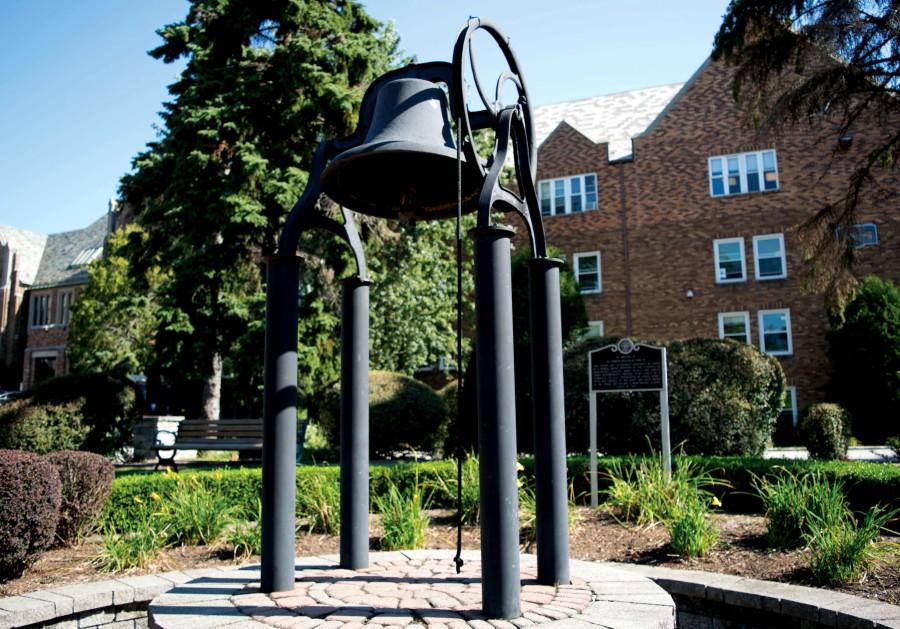 The Victory Bell located in Garvey Park was a senior gift from the class of 2004. It was given in memory of Sister Damien Mlechick who would ring her cowbell during sporting events.

The Victory Bell, a staple of Mercyhurst tradition, is back. In the past, it was rung after victories by the Mercyhurst athletic teams to commemorate Sister Damien Mlechick.

“Sister Damien was the biggest sports fan at Mercyhurst,” said President Michael T. Victor. “Whenever Mercyhurst won, she would ring a cowbell for each sport.”

Sister Damien’s favorite sport was men’s hockey and she never missed a game.

When Sister Damien passed away in 2004, the seniors gave the bell as their class gift in remembrance of her.

“The point was that every time Mercyhurst won a home game, the team would come down and ring the bell, to let Sister Damien know we won,” said Victor. “It’s part of the spirit of Mercyhurst, all about who we are.”

“It’s renewing a tradition, so it was definitely cool to be a part of,” Boylan said.

Not only is it about remembering Sister Damien. It is also about bringing back school spirit.

“It was an old tradition that brought everyone together and the more we do it and ring the bell, the more people that are going to hear it and raise the school spirit and hopefully get more people to come to the games,” Holl said.

The football team rang it first, but all teams are encouraged to join and ring the bell at their accomplishments and home wins.

“For all the teams and groups on campus to continue to do it is important,” said Coach Schaetzle. “We can move forward and bring back old traditions at the same time.”

Mercyhurst is making multiple changes in order to restore old traditions and bring back Laker spirit.

“That’s why the bell is so important,” said Victor. “It’s all about getting Mercyhurst back to the way it was.”