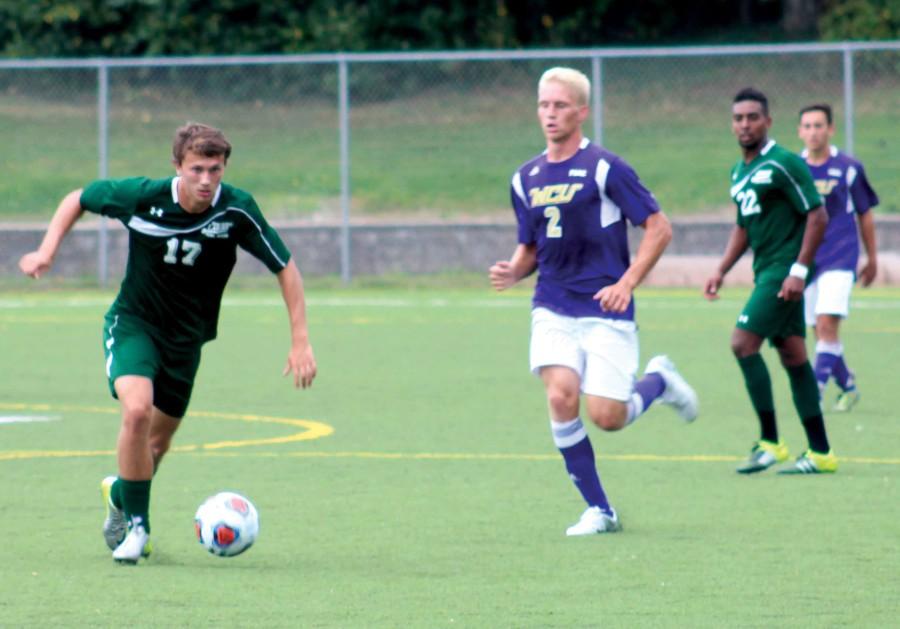 The Mercyhurst men’s soccer team picked up their first win of the season against West Chester University in an intense double overtime game. This gave first year Head Coach Nenad Vidakovich his first win as a Laker.

During the first half of the game the Lakers and Rams went back and forth with scoring goals. Redshirt sophomore, Michael Lennox started the scoring at 18:15 with a shot into the top right of the goal. The goal was assisted by grad student Thom Derks, his first of the season. The Rams came back at 28:52 to tie the score 1-1.

Redshirt senior Thomas Davis gave the Lakers the lead again at 36:59 but the Rams rallied back at 44:23 to tie the game again 2-2.

Neither team scored in the second half or in the first overtime.

The Lakers were finally able to take advantage in the second extra-time session.

The action started when Derks grabbed control from the left side and fired from the box. The shot was saved by Rams goalkeeper Matt Palmer, but he muffed the ball, allowing Korb to fire home the rebound. He sent the ball into the upper-right of the net securing the Mercyhurst win.

“Coach Nenad kept telling us all during practice just to follow everything through,” said Korb about his play. “The ball came to me, and I just tapped it in. It was a good team effort today.”

Laker goaltender, junior Nicholas Smith saved five out of seven shots on goal during the game.

Following Friday’s win, the Lakers fell to No. 18 ranked Bloomsburg in a close 2-1 game. Junior Michael Dirienzo made his first goal of the season this game. His shot was blocked by Bloomsburg goalkeeper but came right back to him where he beat the goalkeeper on the right side on his next attempt.

The Lakers will be on the road for their next two games.