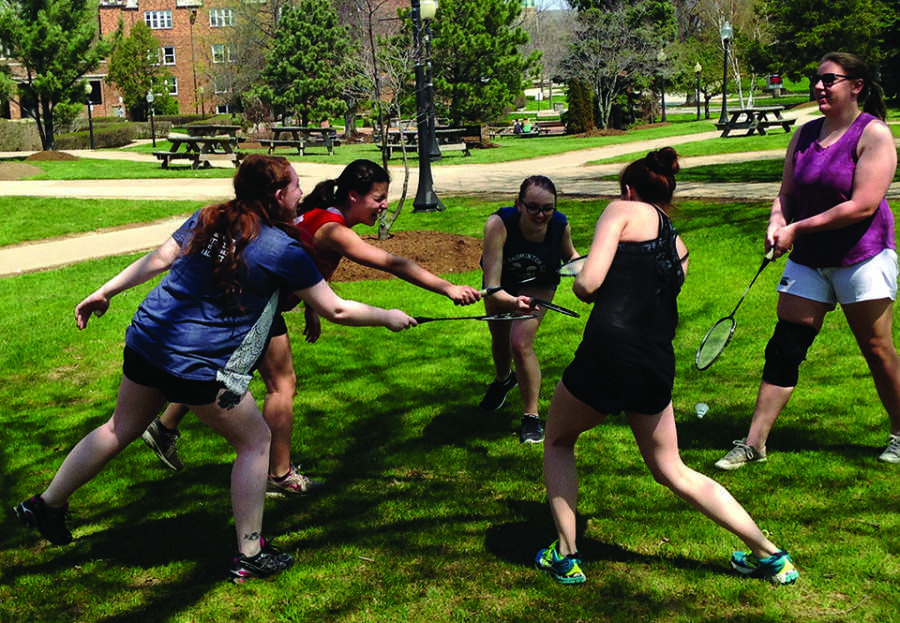 After having a significant number of students sign up, the badminton club is seeking to raise funds to accommodate their needs.

After being inactive for several years, the badminton club is making a comeback.
The first badminton club was disbanded after the original creator graduated. Graduate student Victoria Kreysar revived the club before graduation. She was able to graduate a year early and decided to get the club going again before she left.
The club was officially reestablished in the fall of 2014. After the reformation of the club following the involvement fair last fall, senior Katie McCafferty and Kreysar began a “word of mouth movement” within the History and Archeology departments to gain support for the club. The club quickly gained popularity and recruited about 30 new members.
According to Intelligence major and current club president Katie McCafferty, Kreysar considered recreating the club two years ago when she was an undergraduate student.
“I started because Tory was one of my good friends and it sounded like a fun club,” McCafferty said.
With the help of Archeology major and vice president of the club, sophomore Alex Albano and club adviser, Associate Professor of History John Olszowka, Ph.D., Kreysar was able to bring the club back to life. As one of her first actions, Kreysar set up a committee that allowed responsibility to be evenly dispersed and expanded the number of positions. After Kreysar’s departure in May, she left the presidency and responsibility to McCafferty.
“I was the vice-president and so it made sense that, since I already knew how the club worked, I would become president to run the club,” McCafferty said.
Graphic design major and club secretary Ashley Favata claims that most members were very inexperienced at first, but they kept going, because of the fun they all had.
“When we all joined the club, none of us really knew the actual rules of badminton, we just had all our friends there and we started goofing around and it turned into a club,” said Favata.
This year, the club made it to the club fair and after selling t-shirts with the printing “show us your shuttlecock and we’ll make a racquet,” the group increased in popularity. That day, they received over 130 signatures from students interested in joining the club.
This year, the group plans to organize a teacher versus student badminton tournament, participate in Relay for Life and become involved in the Psychology Club badminton tournament.
“Our main focus is to fundraise a lot, because we need more equipment. We had such a huge outpouring this year of people this year and we want to make sure that we accommodate them all,” McCafferty said.
McCafferty would like to invite anyone who is looking to have some fun to join the club.
“It’s pretty much just an hour-long session of casually playing badmin’, while cracking a lot of jokes and being a little obnoxious,” said McCafferty.
“The club is open to anyone, you don’t have to have any background, you don’t have to be good. You just have to show up and play and meet new and have some fun.”
McCafferty encourages students to “come see what makes us GOOD at BADminton!”
To join the club, no prior experience is needed. For more information, email McCafferty at kat.maccafferty@gmail.com or follow the facebook page.