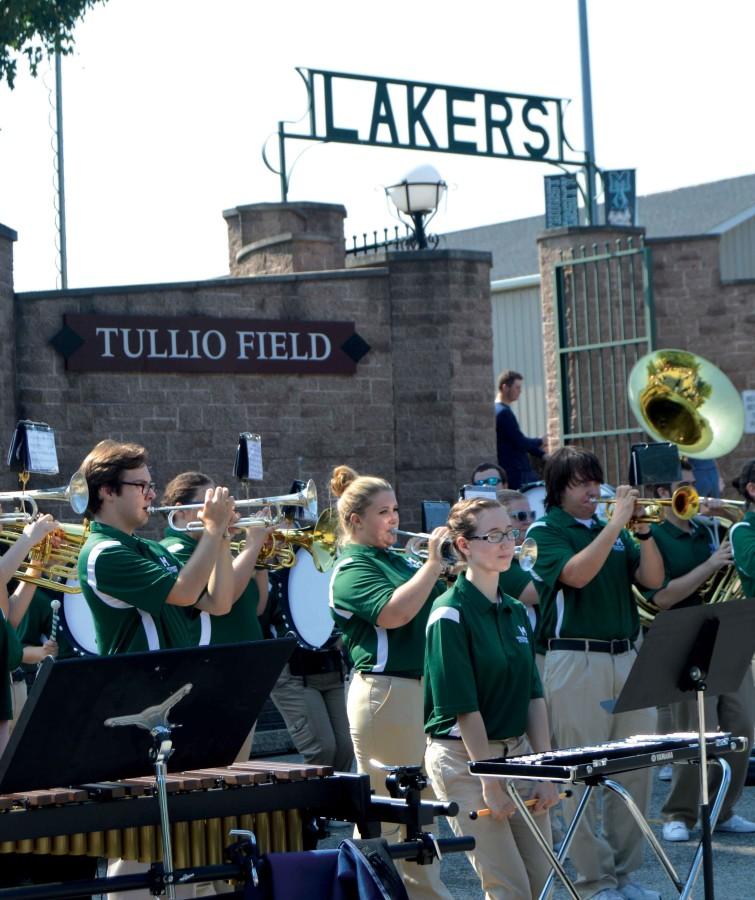 The Mercyhurst athletic band, under the direction of Robert Reid, aims to establish traditions that students, factuality, community and fans look forward to every year. The band’s goal is to bring athletic events to the next level.
The athletic band was established by Mercyhurst’s athletic department. Reid was put into his position to establish the group and gain members. He works closely with the campus community to make sure the band’s mission is fulfilled. This mission is to develop the spirit and pride of Mercyhurst.
The group works with the cheerleading squad, dance team and school mascot, Luke, to enhance school spirit during football season.
They do this by forming the spirit tunnel for the football players to run through at the start of the game. The band also plays songs to get the crowd and players pumped up for the game while the cheerleaders and dancers perform short routines to their songs.
“We are trying to establish the college Saturday afternoon atmosphere by having the cheers and fight song play,” Reid said.
The band even goes to away games that are close in distance to keep the spirit of Mercyhurst alive both home and away fields.
Reid described the band as “a spirit builder for athletic teams.”
The band performs for football, men’s and women’s hockey and men’s and women’s basketball.
Reid is showing success in expanding the athletic band over the year. When the athletic band was first formed, the athletic director and Reid were not sure how far the program would grow.
The band has expanded to now play not only for just sporting events, but also for tailgates and certain events on and off campus. Also, they have revived Mercyhurst’s alma mater which used to only be sung at graduation.
“All of this stuff is new. Hopefully it is working and down the road we can expand the program even farther. We are trying to see where the athletic band fits in. The more places we can play the better we are,” Reid said.
The band is trying to get the name of Mercyhurst out into the community by being involved in local activities.
They will play in the Autumn Leaf Parade which is part of the 62nd Annual Autumn Leaf Festival, in Clarion. After the parade they will perform during the Clarion’s homecoming football game.
Then, the band will then head to DuBois for an exhibition. This is the first year the athletic band is involved in local high school expeditions.
“What we are trying to do is establish the spirit of the college. In the past, there hasn’t been anything like that. So we can do some neat things,” Reid said.
The band’s next perforamce is at the picnic being held after the Mass of the Holy Spirit on Thursday, Sept. 24.