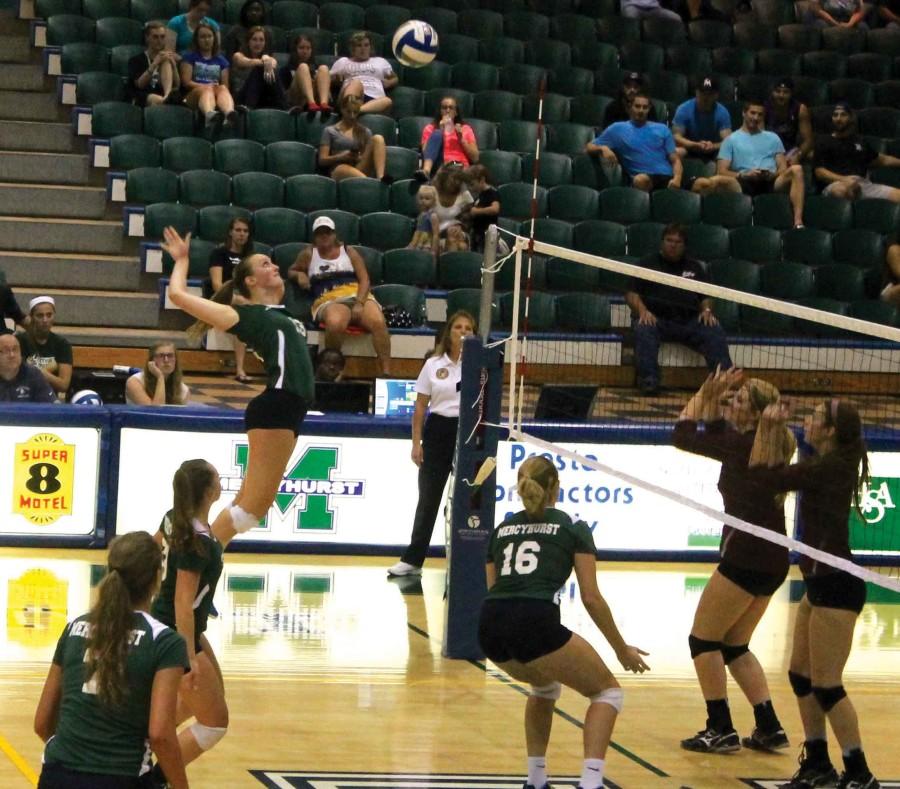 The Mercyhurst women’s volleyball team swept the weekend’s games against Concord University, West Virginia State and Notre Dame College.
The Lakers defeated all three teams, 3-0, going undefeated and advancing their overall record to 5-6 and their PSAC record to 3-1.
“We generally applied a great deal of pressure on our opponents with our serving this weekend,” said Coach Ryan Patton.
“When we started rallies on our terms [with tough serves] we did a good job ending them on our terms for points as well,” he said.
On Friday, Sept. 18, the Lakers swept the Mountain Lions, of Conord University. 25-20, 25-12, and 25-22.
Junior Lauren Kenny led the team in kills with 11. She and sophomore Freda Ireigbe also had four blocks each.
Senior Kelly Vitt led the team in assists during all three games of the weekend. Throughout the games she had 25, 22 and 23 assists.
Junior Sarah Puckett led the team in aces during the weekend’s tournament. She had four, four and three throughout the three games. She also led the team with six digs during Friday’s game.
“Winning the first match gave us confidence leading into our next two matches,” said Puckett.
“We were able to feed off our excitement and intensity to continue to play hard and win.”
On Saturday, Sept. 19, the Lakers swept West Virginia State 25-17, 25-18, and 25-18 and swept Notre Dame College 25-19, 25-10 and 25-12.
During both games on Saturday, junior Sarah Wegrzyn led the team in kills with nine and 14.
Junior Samantha Giardina led the team in digs with eight and junior Haley Adams led in blocks with five.
During the second game of the day, senior Lexi Stefanov and Kenny both had two blocks.
Giardina and senior Erin Brynes led the team in digs with eight each.
“It was a great feeling to come out of the weekend 3-0 at home,” said Kenny. “It is always thrilling to get a win, and to be able to earn three in front of our home crowd of family, friends and supporters was that much more invigorating.”
The Lakers will play again Friday, Sept. 25, against Shippensburg University at 11:30 a.m. and Millersville University at 7:35 p.m.
Then on Saturday, Sept. 26, they take on the University of Pittsburgh at Johnstown at 10:05 a.m. and Lock Haven University at 6 p.m. All weekend games will be played at the Mercyhurst Athletic Center.