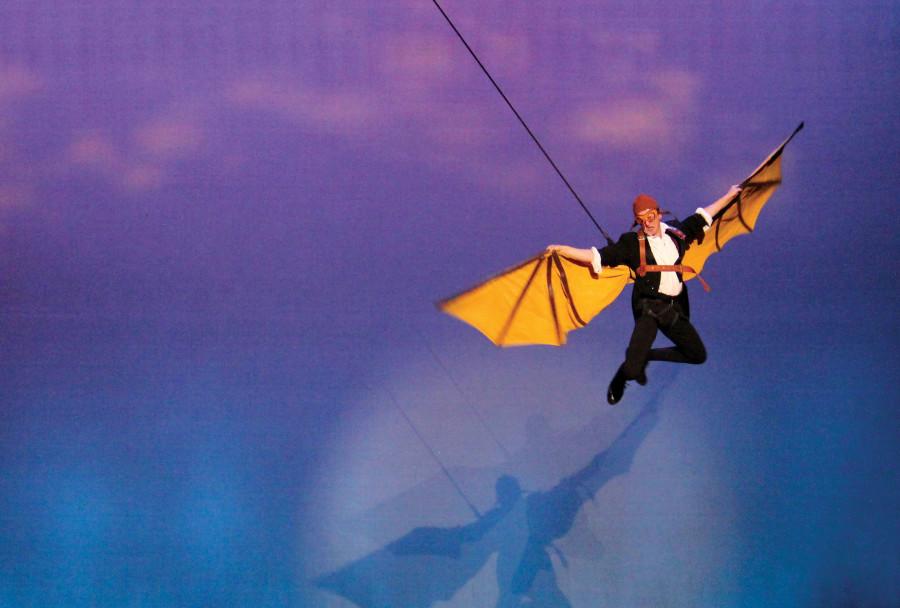 Thomas Kubinek soared high above the audience during his theatrical performance in the Mary D’Angelo Performing Art Center.

Thomas Kubinek returned to the Mercyhurst stage after a 34-year space for a one- night spectacular event on Sept. 19
At the beginning of the show, Kubinek started out with a rather humorous number.
After his first act, he took some time to tell the audience a personal history about his family and grandmother. He gave the audience a rather personal insight in an enjoyable way.
Professor Kubinek, as he often referred to himself throughout the show, interacted with the audience in a comical fashion while tying magical fun into the performance. He pulled a man from the audience and gave him a brief tutorial on acrobatics.
He then proceeded to give the man instructions on how to balance their weight together, and Kubinek climbed on top of the man’s shoulders until he was practically sitting on his head. The auditorium was filled with a thunderous round of applause as people tried to understand what they just saw.
Later on in the show, Kubinek took flight as he soared around the stage.  Unsuspecting members of the crowd got pulled into Kubinek’s funny antics.
One of the more interesting acts involved a young woman’s purse. Everyone thought they knew what would happen: the boring pull-the-rag-out- of-the-bag trick, but Kubinek put his own twist on it.
Not only did Professor Kubinek pull the rag out of the bag, he pulled the rag out of the lady’s wallet, which was inside her purse. Neither Kubinek nor the young lady had met before, which made the act even more mysterious and enthralling.
Children, grandparents and people of all ages enjoyed the show as the acrobatic comedian captivated the crowd.
After the show ended, feedback from audience members  as they filed out the doors. included “great,” “comical” and “hysterical.” A few audience members said that they would come and see the show again. As people left the auditorium, there was a lot of discussion  regarding favorite acts of the show and general laughter about different parts of the performance.
Overall, the production went very well and most people who came to see it would agree it was a high-flying, fun and engaging evening.