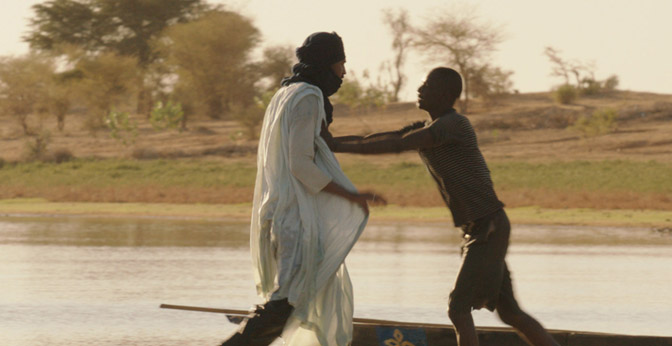 “Timbuktu” tells the story of a family whose faith is challenged.

The tradition of Sunday afternoon movies at the ‘Hurst continues this weekend with a showing of “Timbuktu” this Sunday, Oct. 4, at 2 p.m.
The movie centers around a family living near the ancient city of Timbuktu, just outside of the town where Jihadists, determined to control everyone’s faith, inflict terrible and harsh punishment on the people who live there.
Cattle herder Kidane, patriarch of the family, lives peacefully with his wife Satima, daughter Toya and a shepherd named Issan.
In their private world, they stay above the fray of the violence happening in the town below them.
In the town, run by the Jihadists, music, laughter, cigarettes and even soccer have been banned.
Every day, the new improvised courts issue tragic and absurd sentences for the most trite “crimes.”
Kidane and his family are being spared the chaos that prevails in Timbuktu.
However, in the wake of a tragic accident, the family’s destiny changes abruptly in this masterful cinematic piece.
The Denver Post declared the performances in Timbuktu to be “hushed and memorable.”
Cinematographer Sofian El Fani captures the beauty of this desert land.
Since its premiere in January 2015, the film has been nominated for an Academy Award.
“Timbuktu” is a stunning work that you will not want to miss.
The film will be shown this Sunday, Oct. 4, in Taylor Little Theatre. Tickets are $1 for students with their IDs.