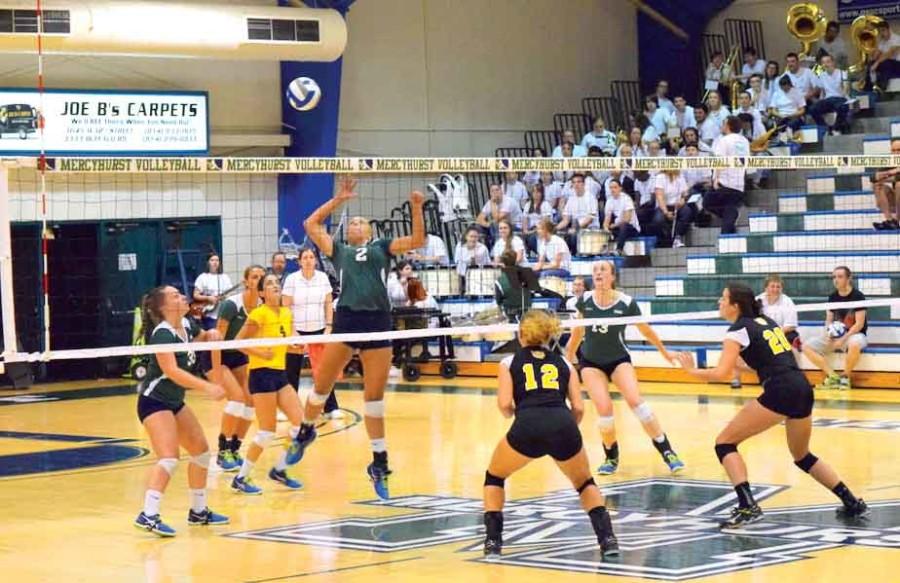 The Mercyhurst volleyball team increased their record to 7-8 after being 2-6 following the first two weeks of playing away games.

The Mercyhurst women’s volleyball team is a close-knit family that had a rough start to the season in their away games, but things changed once they played on their home court.
“We are a great group of women who get along on and off the court,” said senior Kelly Vitt. “It really makes coming to practice each day that much more worthwhile.”
On Sept. 4 and Sept. 5, the Lakers started off their season in Big Rapids, MI against Mckendree University, the University of Wisconsin-Parkside, Missouri Western State University and Saginaw Valley State University. During the weekend, the Lakers went 0-4.
During the next weekend, Sept. 11 and 12 the Lakers played four games in Findlay, Ohio going 2-2. They won against Cedarville University and Ursuline College, but lost against Hillsdale College and the University of Findlay.
“We are looking strong,” said senior Erin Byrne. “We have faced a lot of strong competition to start the season, which is helping us expose some of our weaknesses and in turn help us improve our game.”
“Maybe more impressive than the wins is how we’ve been in our losses,” said Patton.
After the first two weekends of the season the Lakers record stood at 2-6.
“We have a lot of potential this season,” said Vitt. “The gym is competitive and eager to improve.”
During the next weekend, the Lakers took home court advantage and rallied to sweep their opponents and improve their record to 5-6.
On Sept. 18, the Lakers won against Concord University.
The next day on Saturday, Sept. 19, the Lakers won against both West Virginia State University and Notre Dame College.
Moving along to the fourth weekend of the season, the Lakers went 2-2 with home court advantage again, increasing their record to 7-8.
On Friday, Sept. 25, the Laker lost against Shippensburg University, but won against Millersville University.
The next day the Lakers lost against the University of Pittsburgh at Johnston and won against Lock Haven University.
“I like the way this team is coming together,” Head Coach Ryan Patton said
Next, Mercyhurst will take on California University of Pennsylvania on Friday, Oct. 2, at 7:05 p.m. and Seton Hill University on Saturday, Oct. 3, at 2:05 p.m. Both games will be played at the Mercyhurst Athletic Center.