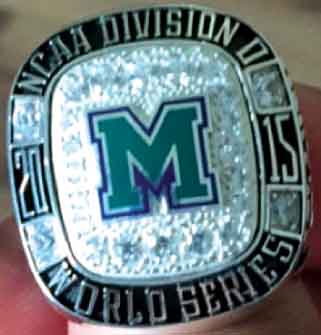 The rings represent the baseball team winning the Atlantic Region Championship and playing in the DII College World Series.

The Mercyhurst baseball team was rewarded for their 2015 baseball season, where they won the Atlantic Regional Tournament for the first time in program history and continued on to the Division II College World Series. On Friday, Sept. 25, a ring ceremony was held at Mercyhurst to honor their success.
The Lakers went 22-6 in the PSAC conference last year. This ranked them as No. 1 seed in the NCAA Atlantic Regional Tournament and gave them home field advantage at Jerry Uht Park.
After the tournament, the Lakers came out on top going 4-1 and claiming the title of Atlantic Regional Champions.
“In the last game I knew we had to win. We played Millersville who had beaten us in the PSAC. It was a great game for the title win because we were able to defeat them this time,” said former player Angel Martinez.
The Lakers then advanced to the DII College World Series in Cary, NC. They played hard, winning their first game 3-1, but then fell to University of Tampa, who ended up winning the tournament and Cal Poly Pomona.
Although their trip to Cary was cut short, there is only celebrating to be done to commemorate their historic accomplishments.
The team ended their season ranked fourth in the country with a 40-11 overall record.
The ring ceremony was an emotional night with family, alumni and friends coming together for the celebration.
The ceremony was held under a tent in the parking lot by Tullio Field where a table was set up with the championship rings and trophies on display.
“Being back with my old teammates and alumni was awesome. Alumni said they were supporting us the whole journey by following stats and watching live games when they could. Having their support was special for the team,” Martinez said.
The host of the ceremony was alumni Ryan Schreiber. Speeches were given by Head Coach Joe Spano and Assistant Coach Charlie Spano to start off the night.
“As a coach, the ceremony was a great way to say thank you to our team, parents, fans and administration for an amazing season,” Assistant Coach Charlie Spano said.
Then, each player was awarded with a replica Atlantic Regional Championship trophy, given by the NCAA Program, and a championship ring.
The championship ring features the words NCAA Division II World Series on the front with the Mercyhurst “M,” Atlantic Region Championship on the one side and the players name and number on the other side.
“For me, the ring represents the pride, dedication, success and more that the team has,” Martinez said.
Schreiber called each player up by giving their stats from last year and saying how they contributed to the team.
“I think for the rest of their lives each player will be able to look at those rings and reflect on what we accomplished,” Spano said.
It was a personal ceremony as jokes were brought up as certain players were announced and nicknames of players were mentioned.
“The season we had in 2015 was a total team effort. I think for the rest their lives each player will be able to look at those rings and reflect on what we accomplished. That’s why it was so important to have this night,” Spano said.
Although the team’s regular season does not start until 2016, they have weekly practices and scrimmages to prepare.