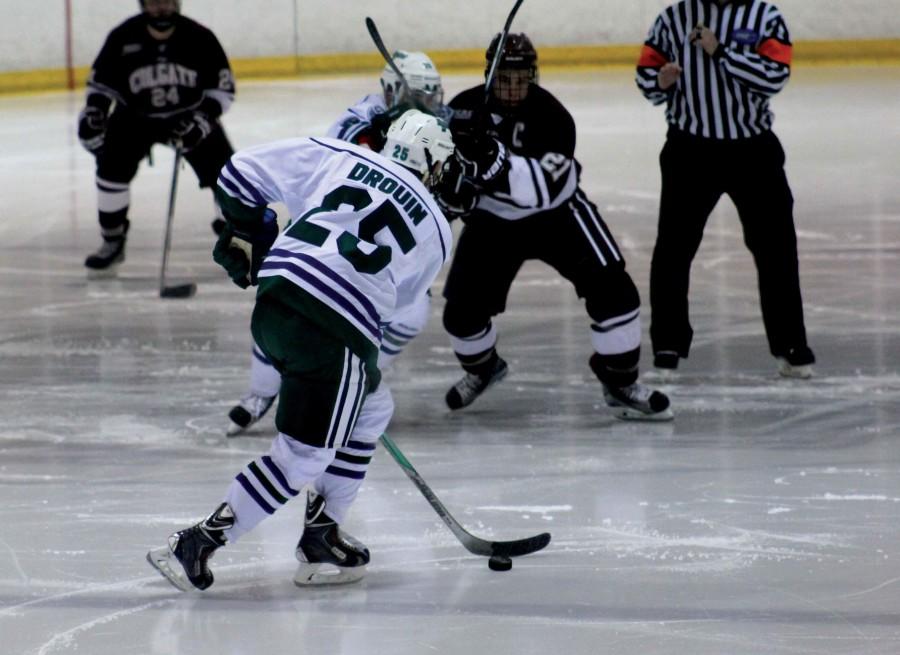 Junior Philippe Drouin (25) scored during the Lakers 9-7 rally victory on Sunday for their first win of the season.

After dropping their home opener on Saturday night 5-2, the Mercyhurst men’s hockey team rallied on Sunday to record their first win of the season, 9-7, and splitting the series with no. 20 Colgate.

“After having our two first games this past weekend, I knew we had a lot of talented freshmen and a great veteran core coming back. But, the thing that was nice to see in the games was the whole team coming together and battling every shift to get the win,” senior Anthony Mastrodicasa said.

On Saturday, Oct. 3, the Lakers quickly fell behind when Colgate scored three goals.

Colgate came back and scored their second power-play goal of the game, giving them a 4-1 lead.

Sophomore Michael Verboom found the back of the net at 17:06, scoring his first collegiate goal in the third period.

Colgate scored an empty net goal to win the game 5-2.

On Sunday, Oct. 4, the Lakers came out ready to give all they had to prove they could beat Colgate.

“Sunday was one of the craziest games I’ve seen,” said Mastrodicasa. “I thought we came together as a team and did really well in the offensive zone.”

Junior Spencer Bacon started off in goal for the Lakers.

The Lakers’ first goal came on a power play when freshman Lester Lancaster and junior Kyle Dutra assisted Todd, tying the game at one.

Sophomore Kane Elliot found the back of the net with a pass from redshirt sophomore Jack Riley, giving the Lakers their first lead of the series 2-1.

Sophomore Brandon Wildung stepped in for Bacon, going into the second period with the game tied 3-3.

The Lakers rallied in the second period with three goals.

On a power play, sophomore Bryan Sienerth snuck one past Colgate’s goaltender Zac Hamilton, assisted by Todd and Riley.

Colgate pulled Hamilton and put in Charlie Finn, who grabbed the win during Saturday’s game.

Short-handed, Elliot beat the defense and shot one past Finn, ending the second period at 6-3, Lakers.

Junior Philippe Drouin started the scoring in the third period with a goal assisted by Cook and Best.

Colgate then came back and scored four goals, tying the game at seven with under two minutes to play.

The Lakers won 9-7, giving the Lakers and Wildung their first win of the season.

“No team should expect to let up seven goals and win, so coming into this week of practice we are definitely going to be looking at our defensive zone, knowing our roles in the defensive zone and picking up guys away from the puck,” Mastrodicasa said.

Mercyhurst travels to Watertown, Mass. on Friday, Oct. 9, and Saturday, Oct. 10, to play their first two Atlantic Hockey Association games of the season against Bentley University.