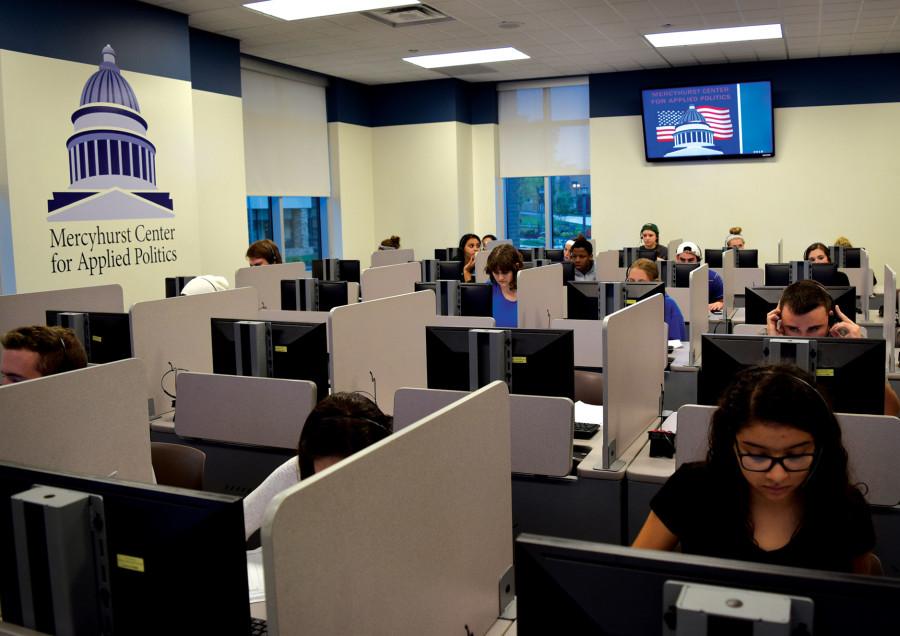 Students call Pennsylvania citizens to ask them their opinions about Republican candidates running for the the upcoming 2016 general election. Results show that Ben Carson and Donald Trump are the top two candidates.

Joseph Morris, Ph.D. and Rolfe Peterson, Ph.D., both associate professors of the Political Science Department, headed Mercyhurst’s poll of randomized registered Pennsylvanian Republicans on what they thought about the GOP candidates.
There were 120 students from three classes–Road to the White House, American Government and Political Science Research Methods- that helped call the 483 Republicans that took the poll. Paid employees and student volunteers were involved as well.
The poll lasted from Sept. 21 to Oct. 1, and the margin of error, or the amount of random sampling error, is 4.5 percent.
According to the poll results, which were released on Monday, Oct. 5, 18 percent of Republicans say that they would vote for Carson or Trump if the elections were held today. Nine percent say they would vote for Jeb Bush and eight percent for Carly Fiorina.
“Pennsylvanians are interested in nominating outsiders because they are unhappy with Congress, which is controlled by their own party,” Morris said.
Sixty percent of Republicans say that Congress’ performance is poor, and 57 percent say that it is important for the Republican Party choose an outsider as the presidential nominee.
“We decided to do Republicans because the GOP race is more interesting,” Morris said.
The top two candidates in the GOP race are Ben Carson and Donald Trump. Neither have professional political careers and have never been nominated for a political position before.
With the lack of political credentials, they are considered outsiders to politics. According to Morris, two outsiders being at the head of the race is what makes the race interesting because this type of occurance does not typically happen.
Results from the poll showed that Republicans leave the possibility open to vote for an insider, despite possible unpleasant feelings towards Congress. The data showed that they prefer an outsider, but do not completely dismiss the insiders either.
“It would not be surprising if an insider won the Republican presidential nomination,” Morris said.