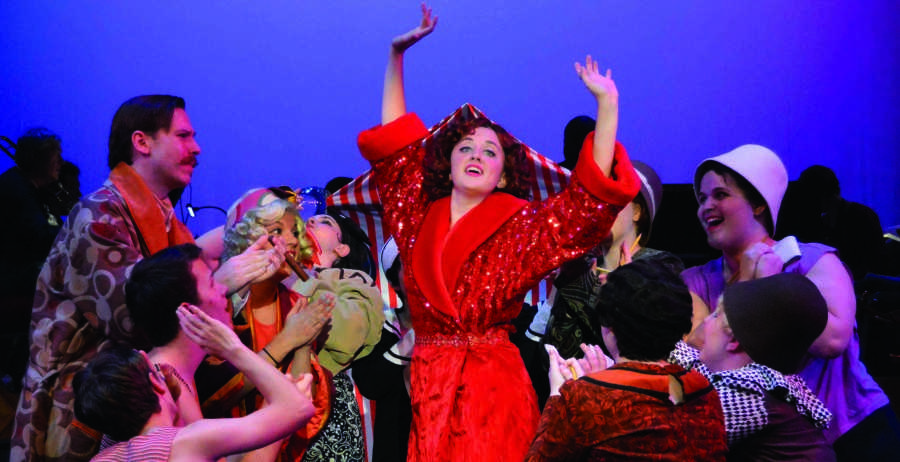 The cast of “The Drowsy Chaperone” perform one of the big musical numbers from the show.

Come and see “The Drowsy Chaperone” this weekend at the Taylor Little Theatre.
With a cast of 20 performers, seven backstage hands and 14 orchestra members, and with many tap dancing routines, stock characters and vaudeville, the show is sure to appeal to audience members of all ages.
The main character of the show is an ambiguous man in a chair.
As he sits in the center of the stage with a spotlight on him, he puts on an old recording of a 1928 musical comedy, “The Drowsy Chaperone.”
Suddenly, the recording comes to life and the musical begins.
Brett Johnson, the director of the show, encouraged the cast to really learn the script.
“It is very important for the actors to explore the scenes as well as their own characters,” Johnson said.
He encouraged the actors to research the time period, and their parts in the play and really find a connection to the 1920’s.
“I absolutely love directing, and while there is a lot to collaborate, the end result is very rewarding,” said Johnson.
To be able to collaborate with so many different people and create one product is an absolutely amazing experience for Johnson.
“The Drowsy Chaperone” cast includes Michael Rowe, as the Man in Chair, Bethany Sulecki as Mrs. Tottendale, Vince Marrazzo as the Underling, Aidan Giles as Robert Martin, Matt Marucci as George, Maxton Honeychurch as Feldzieg, Jennie Cross as Kitty, Cole Prots as Gangster #1, Owen Hitt as Gangster #2, Luke Ballantyne as Aldolpho, Sarah Creighton as Janet Van De Graaff, Sarah Krempasky as The Drowsy Chaperone, Abby Larimore as Trix, Erin Fink, Tonya Lenhart, Charity Ludwig, Leah Miori, Ashley Poletto, Rosie Pregler as Ensemble and Brianna Carle as the Superintendent.
The creative team includes Set Designer Aaron White, Lighting Designer Madeleine Steineck, Musical Director Andrew Rainbow, Choreographer Kelly Jean Graham, Production Stage Manager Kathryn Schmitt and Assistant Stage Manager Brianna Carle.
The show is running Thursday through Saturday, Oct. 22 and 24, at 8 p.m. and Saturday and Sunday, Oct. 24 and 25, at 2 p.m.
Tickets are $15 at the door.