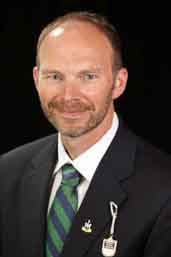 Not only is this a major opportunity for Spracklen, but he also will be spending time with his father who is the head coach of the Russian men’s rowing team.

When the Russian women’s coach quit this past summer, Spracklen’s father told him they needed someone to take over the program and asked if he would come back and continue in the quest to the Olympics.

Spracklen took that offer and went to Italy for two weeks for training camp with the team, followed by a week in France for the world championship.

Spracklen’s opportunity begins Wednesday, Oct. 21, when he flies to Russia in hopes of coaching the rowers to qualify for the 2016 Olympics in Rio.

Russia’s rowing used to be the strongest power house in the sport. Currently, they are trying to get back to that powerful state.

“It is a golden opportunity. There are many reasons why it is an opportunity I couldn’t pass up. One of them is that my father is a really good coach so I don’t get to see him much. He is the best in the world, I want to learn as much as I can from him,’’ Spracklen said.

Although there are ups and downs to taking this job offer, Spracklen believes that coaching a national team is an opportunity he could not pass up.

“There is no bigger stage than the Olympics. It is the pinnacle of anyone’s career and a chance that most people only dream of. To have the opportunity to coach some of the best athletes in the world and spend time with my father in probably his last Olympics is not an opportunity I could pass up,” Spracklen said.

However, being a husband and a father will be a slight downside to taking this offer.

“It is hard on my family, I have four children. My wife is supportive of this, but it is a sacrifice. There is always a downside. But it is only for a year, right now only 10 months. And I’ll be back every six weeks and be able to stay for a week. It is a lot of traveling but it is a small sacrifice to make,” Spracklen said.

He knows that Mercyhurst’s rowing team will be in good hands as Assistant Coach Jamie Francis takes over.

“I feel bad for the seniors this year. But the team has been very supportive and understanding and that has meant a lot to me. The program will continue to be successful. We have a culture of excellence and winning here. The team is in great hands,” Spracklen said.

Spracklen is receiving support from Mercyhurst.

“I am very appreciative of President Victor for allowing this opportunity, and the support from administration has been great. A lot of people feel like they are a part of it because they are close to me. That has surprised me. I didn’t expect that many people to get excited. It has been an interesting dynamic,” Spracklen said.

Spracklen said he will share updates through Twitter. He sees how this opportunity will benefit Mercyhurst and the community of Erie. When he returns he would like to get involved with the community to talk about his experiences.